Blackstock Farm is a new attraction and one that not many people will have heard of. In it's second year of running, the  Fright Nights event is located on an open family farm in Sussex.  The website itself doesn't give too much away so we were really unsure what to expect. Turns out we were about to be completely surprised!

We arrived at the event to find a great atmosphere, a well themed hearse at the front gates and a searchlight in the sky that let you know you're in the right place (which is reassuring as Blackstock Farm is a little off the beaten track). Initial thoughts are positive, in the dark we can hear a fair few screams coming from inside the venue. We make our way into one of the farm's barns which is rich in decoration and creates the perfect mood for the event.

Outside in the courtyard, street entertainers juggle fire and interact with guests and the atmosphere is perfect on this cold and wet October night. The scene has a Jack The Ripper vibe and not only feels credible tonally, but provides the right balance between creepiness and humour.

Our first maze experience comes in the form of 'Gretel's Demise'. This is an actor led tour that doesn't quite go the way you might expect as we're led through the twisting pathway. We see victims helplessly warning us of our fate and before long we're face to face with Gretel, and very soon the evil witch has her sights on us. It's quite a short experience but is a nice warm up for the attractions further on and the finale does have us cowering away as there's seemingly nowhere to go.

Just a short walk away is the Forest Of No Return. This is the event's woodland walk and from the start it's lit and dressed beautifully. Fog clings to the ground as our eyes adjust to the darker sections and we try to make out what's ahead of us. There's some great jump scares throughout and a really long dark maze that had us completely lost. The woods don't stick to one theme but this seems to work well as you literally have no idea what's coming up ahead. There's some strong distraction scares too which add some variation to a solid attraction.

Our final haunt comes in the form of Hell's Labyrinth, which, as it's name suggests is a never ending set of winding tunnels and corridors which help disguise some excellently timed scares. The maze feels never ending and the actors really work well to hide in the shadows. The Labyrinth is beautifully themed throughout and there's some really clever design features including one very simple but effective trick we've never seen in any scare maze before. The vortex tunnel spun at an alarming rate making our trip through it tricky to say the least (we were later told that the tunnel was built and designed in house in just two weeks and even more impressively - the whole event was conceived and built in just seven!) All in all this is a gauntlet of a maze that will delight and terrify Halloween fans in their masses.

It's important to note that Fright Nights is only for the brave and some of the content provided by the street team, although not offensive in any way, is geared to a more adult audience. The farm runs more family friendly activities during other periods over Halloween. Some of the scares are really quite intense even for veterans in the scare world. Actors felt fresh and committed fully to their roles and aren't afraid to get very very close.

You don't have to scratch the surface to see how much time, thought and effort have gone into creating an encompassing event and it's hard to believe that it's only in it's second year. If this is a sign of things to come, Fright Nights at Blackstock Farm could well become one of the staples of the Halloween Season. 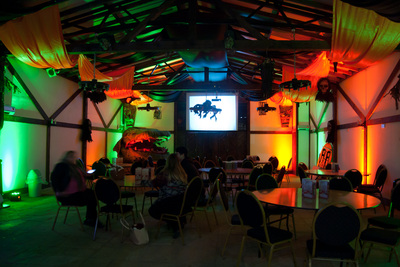 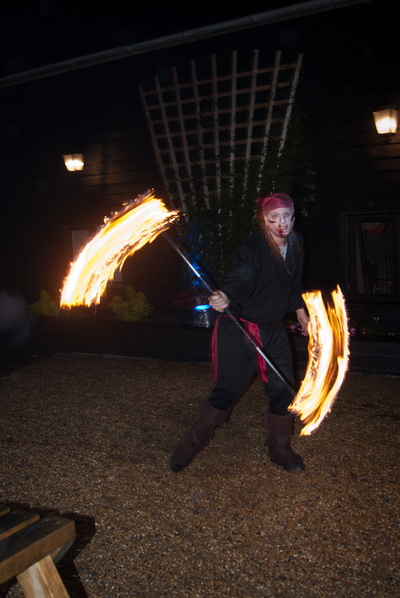 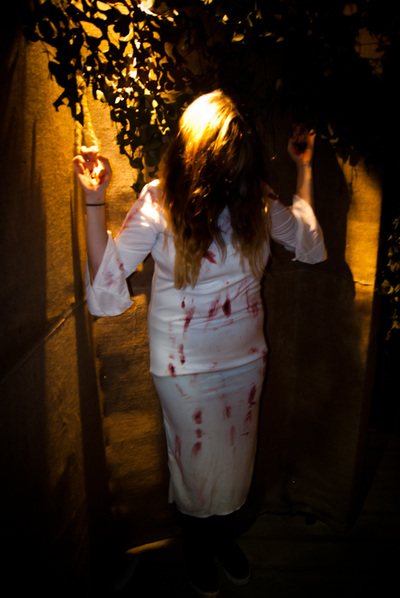 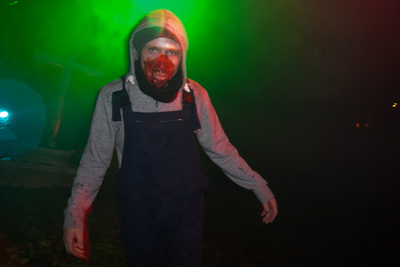 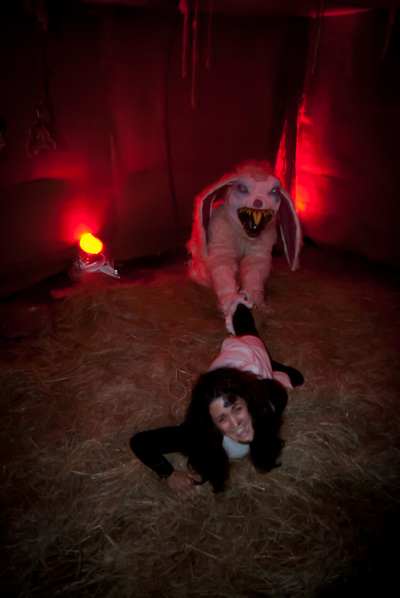 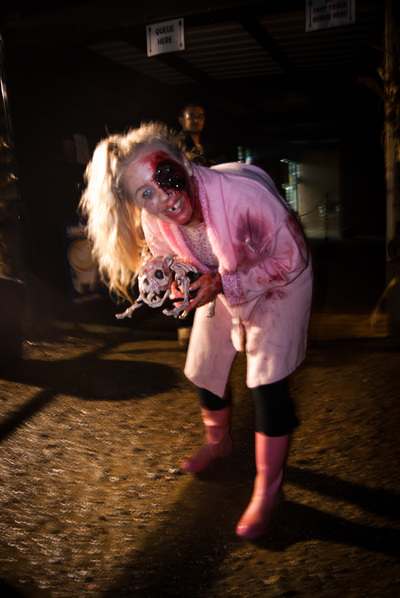 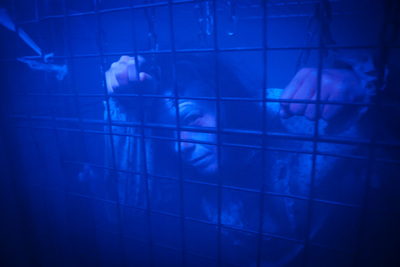 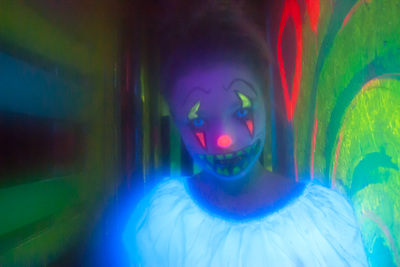 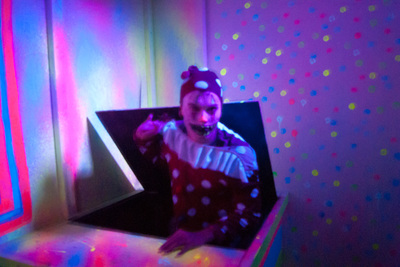 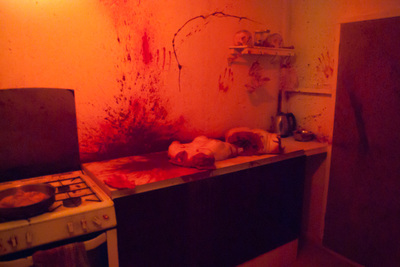 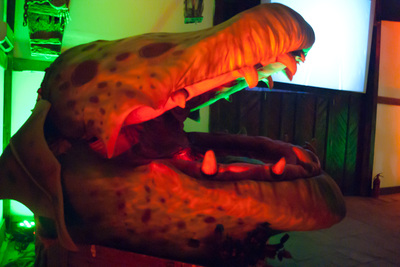 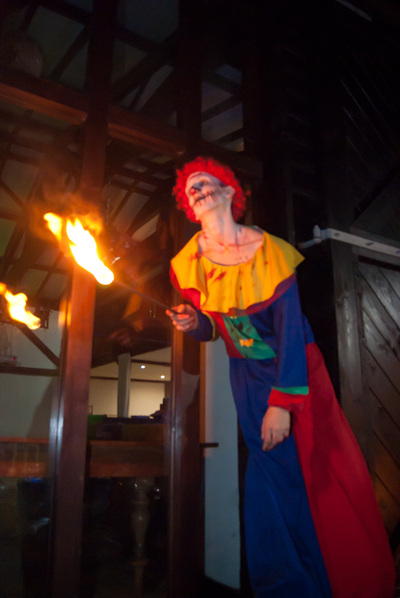 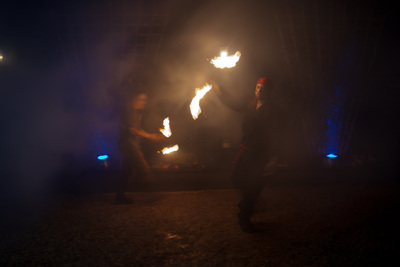 amazing location and 3 great mazes....the haunted wood caused our friemd to topple over in her hurry to escape and was even better the second time roumd when the darkness had settled in and the moon had laid to rest....hells revenge was brilliantly set out with plenty to get the heart going and even the revolving tunnel which is beamed to the bar area on a large screen....as for the other maze i was seperated frpm my group and left helpless blocked in the room by 2 female ghouls who had a temptation to castrate the male species.
.my exit was blocked for some time with a non blinking non emotion face an inch from mine...glad to get out.....also om the grounds magicians who were superb but hats off to the acting crew who were superb especially alice and mad hatter who spent so much time imteracting it made the whole night...glad we went round twice and spent the whole evening there cant wait til next season