Abducted Live is a new horror themed room escape adventure, that has recently opened in Hastings on the South Coast of England. The event offers a standard 60 minute escape or the extreme version which adds some even scarier elements to the existing gameplay. Naturally, we opted for extreme, which seemed like a great idea until we found ourselves being hooded and bundled into the back of any army truck at gun point! It was great start to the event and by the time we were allowed to take our hoods off, we are all chained to different parts of a room, with no obvious form of escape.

Like most room escapes, we then spent the next hour trying to find the clues and solve the puzzles  to facilitate our escape – all whilst working out how to unchain ourselves. One of our group remained chained up for over half an hour trying to solve a particularly tricky conundrum with a clock, while the rest of the team kept hunting for other keys and combinations.

It was therefore with much jubilation that we found the key to get out of our cell, only to find another room full of locked doors, padlocks and most worryingly – body parts! The heat was on – we were in a serial killer’s workshop and with just 25 minutes left to escape, we could hear his chainsaw revving up outside!

Sadly for us we were just one clue away from escaping and obtaining the weapons needed for the next part of our mission. As we didn’t actually escape, we needed to be extracted by the army who quickly urged us do one last thing for them. It sounded simple but of course the serial killer knew we were out..

We won’t say too much about the final element of the extreme version, but it must have looked quite comical seeing 6 grown adults in camouflage gear running around a paintball arena being chased and narrowly dodging a hulking, chainsaw wielding maniac. But with team work and a little, bit of luck we were able to defuse the boom and save the world.

Compared to other room escapes – Abducted Live had one of the largest collection of puzzles to solve, meaning that the whole team were frantically busy at all times. They were also some of the hardest we have experienced. We are sure that some of them we got by accident (a clue should have led us to a book and page no but we managed to recognise the picture and know exactly where to look), and a few really left us baffled.  But apart from that final one where we ran out of time, we managed to work together and help each other’s out, even if we did forgot to use any of the potential cheats, we could have asked for.

All in, the whole team had a fantastic time at Abducted Live. The puzzles were hard yet satisfying, the extreme elements added an extra dimension to the experience and the outdoor sections left us breathless and panting. If you’re looking for something a little different then we would highly recommend it. 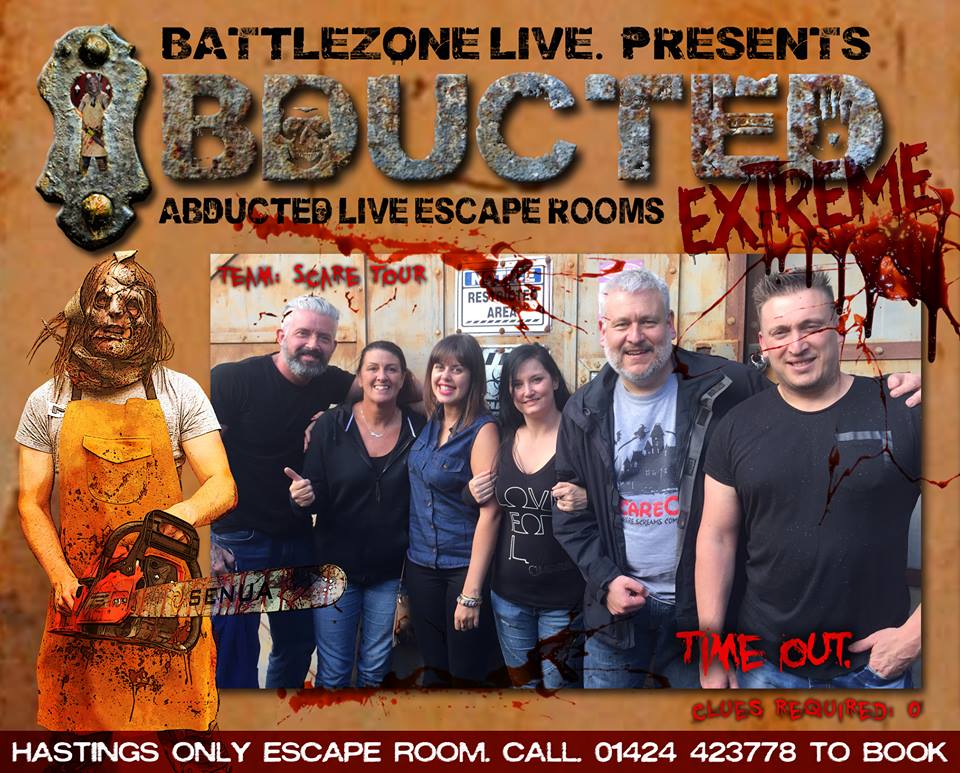