With the Government requirement for us all to socially distance ourselves, escape room experiences around the country have had to close down for the forseeable future. But does that mean they are not playable?  Different attractions are trying different ways to survive, and this week we were invited to play test Victoria's Last Challenge by 11th Hour Escape Rooms.

Sat at individual locations, our team of three all dialled into the conference call, and as the timer started, we had complete control of our "virtual host", who we could instruct to search, open, or enter combinations as required. Unlike the initial frantic search that we usually do on entering any escape room, we had to take a more structured approach as we only had the one "window" into the action. Fortunately we had been provided a map of the room beforehand, so we could conduct a methodical search, and as we started to find clues and puzzles we were able to progress through the game.

As this game is usually played in person, there were a couple of puzzles where we just had to leave the host to do the action required. Even though the technology is wonderful, can you imagine 3 different people trying to manually instruct someone in how to put a jigsaw together? The hosts were particularly gracious throughout, and we tried not to take advantage of them too much!

As it was - the host was very good at capturing the detail in the room including any surprises or reveals. Although we could see clearly - we would sometimes have to ask for clarity on words or images, and even the audio clues were completely audible to us.

It was quite surreal doing the room this way, but we managed to escape with a few minutes spare, which proves that its not impossible to do. It really would have been great to do this room in person, but the virtual element was still great fun and provided a challenging hour of exploration and puzzle solving. One of the team had already played this room before (so kept quiet on some of the puzzles!), but commented afterwards, that teh virtual game, still had the mystery and excitement of playing the physical game.

So if we are facing a few more months of Lockdown, then we would recommend you give this room a go. Not only will you be helping out a small business that is about to lose a lot of income, but you are getting a fun and challenging experience  with your friends. Albeit all in separate houses!

A few years after opening, 11th Hour Room Escape have upgraded their Exit Visa game, and released a sequel. But could this game match up to the fun or the original, or would it be another case of "difficult second album" syndrome?

Fortunately, we are pleased to say that this new game is just as fun as Exit Visa - and in fact includes a number of unique puzzles and games that took us some time to conquer. As the final test group before the attraction opened, we were the first team to actually escape. Even the owners had worried that it was starting to look like the game was too hard, but we do think that beginners could struggle with some of the more esoteric puzzles (but clues can be offered where needed.)

Obviously being big music fans, the game includes lots of musical references, and actually uses some of the large props that could be found in the previous room. We don't want to give anything away but the first puzzle actually made us feel like a record producer! Also - as a player - you don't need to have an encyclopedic knowledge of music but it did help with a couple of puzzles (especially identifying the "hidden treat").

Another big element to this room, is that it would be possible to plow through the puzzles, locks, games etc, but unless you can solve the final mystery you wouldn't get out the final door. We loved, therefore, that things we found along the way, helped us identify the killer, solve the mystery and escape safely with 8 minutes left!

Criminal Record is definitely a jump up from Exit Visa and its clear that time and money has been invested in electronic tricks and puzzles, that really add to the overall experience. Yes its fun opening a padlock with a combination, but there's always a brief surge of excitement when something you have moved or placed manually, releases something hidden.

All in, we cant recommend 11th Hour Escape Rooms enough. With this new game and the incredible Victoria's Last Secret, there are some great rooms that would appeal to any escape enthusiasts! 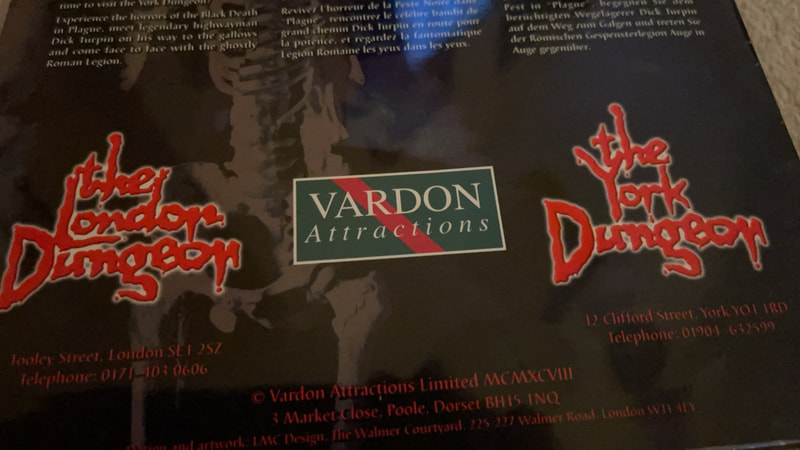 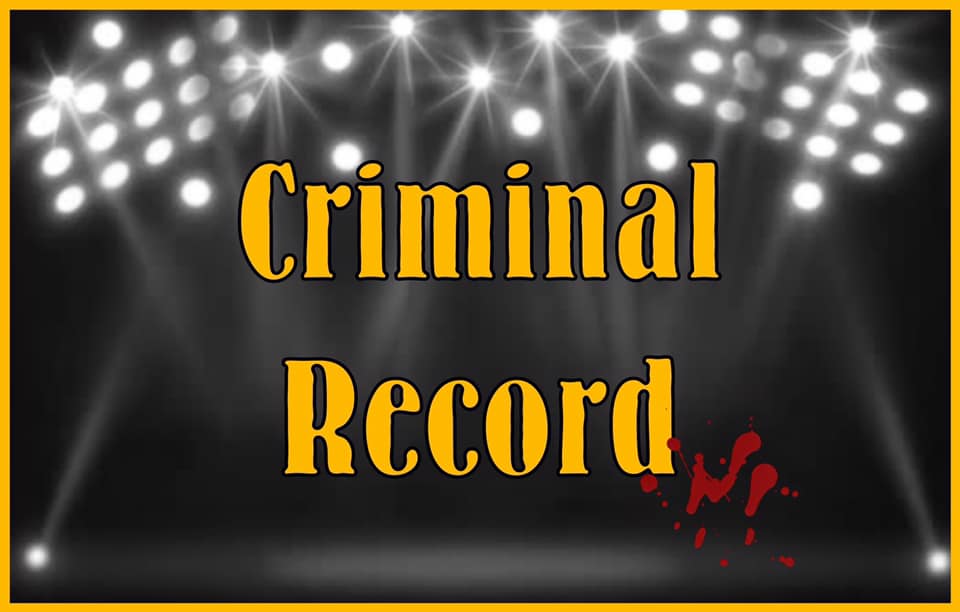 After the roick and roll excess of their last room Exit Visa, 11th Hour Escape Rooms in Chippenham are just about to open a brand new adventure - Victoria's last Secret. Although not specifically horror themed, the lovely guys from 11th Hour invited us along to test drive the room!

Compared to Exit Visa, this room is much smaller but certainly packs a number of surprises into its unassuming frame. Set in the eaves of the building, the paintwork and antique furniture, create the impression of rummaging around an old dusty attic. An attic that was packed with puzzles and padlocks at every turn.

As usual - the first few minutes of the room were spent just trying to work out what was there and trying to make some semblance of the experience. We were all adamant that we would find grandmas hidden inheritance, and so of course started to turn the room upside down in our quest. The clues and puzzles were pretty tricky in places and being a test run before the public, we did need a few hints along the way. There was one particular red herring that left us scratching our heads for ages. So, it was then a relief to find out we weren't being stupid, when the team afterwards agreed that it was misleading and would remove it!

By the end of the experience we had solved all manner of different clues and puzzles but still had to find the key to get out as well as locate the hidden inheritance. Fortunately for us - we managed it with just 94 seconds spare! These last minute escapes are proving to be our signature move here at ScareTOUR!

But joking aside, we thoroughly enjoyed this room - especially some of the hidden surprises that popped up during play. The puzzles were a great mix of locks, combinations, practical activities and more, and with the engaging story and great sets, Victoria's Last Secret certainly entertained us for the hour. If you like puzzle escapes then you will love this intimate little gem. 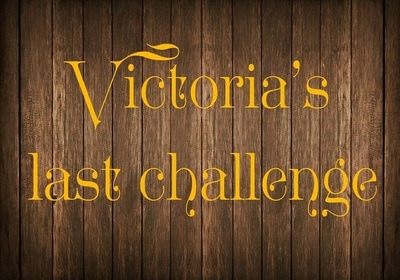 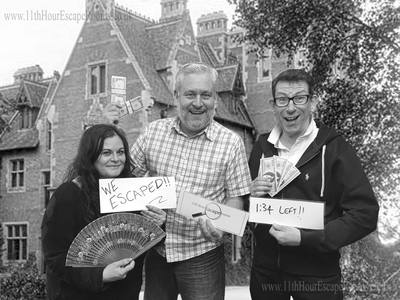 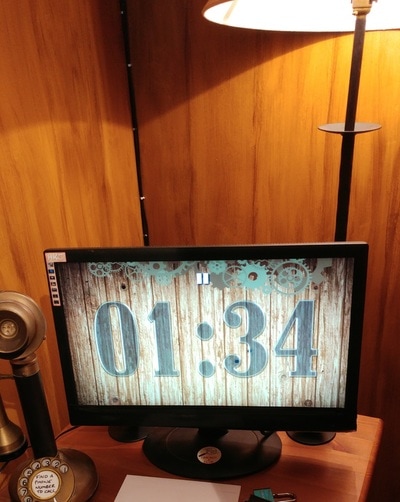 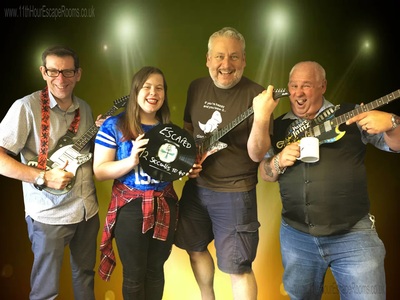 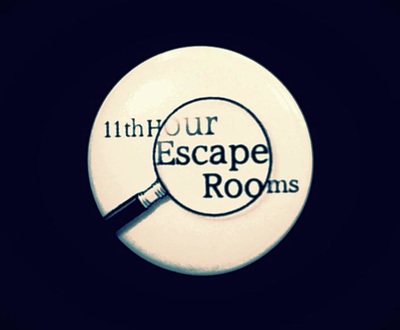 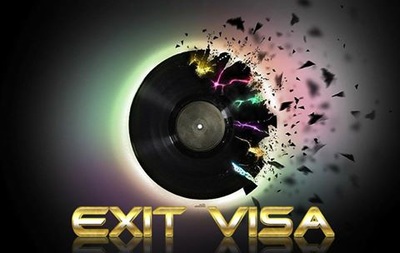 Who knew that a room escape adventure could be so Rock and Roll? We’re used to the scenarios of being locked in rooms with a zombie, or needing to escape from a serial killer, so when we applied to experience 11th Hour Escape Rooms in Chippenham we weren’t sure what to expect.

Themed around a mythical rock band, Exit Visa, that disappeared in the Bermuda Triangle, our mission is twofold – find a way out, and more importantly, find the master to their latest album. Sound easy? We thought so. So why did it take us 59 minutes and 48 seconds to escape?

The reason for this was the sheer abundance of clues, puzzles, padlocks and secrets in the room/rooms. From the off, we were bouncing from clue to puzzle, solving and unlocking things that just revealed more puzzles and more clues. The joy of this event is that everything was related to classic rock and roll, and amongst the searching and puzzle solving, we laughed and reminisced about classic albums from the past including Prince, Bowie, Led Zeppelin etc.

Without giving too much away, some of the clues were lifted straight out of certain songs, and the event used a number of sound bites throughout, including a great use of a radio and the elaborate mixing desk ahead of us. Some of the clues and the way they were delivered, were some of the most ingenious we have seen in any room escape we have experienced. Of course, a few times – a clue or puzzle would just get the most of us  and thankfully a few hints are available – just be prepared to embarrass yourself with a forfeit if you claim one!

Our time in the rooms seemed to race by really quickly and all too soon we were on the final two puzzles with under 3 minutes to go. We found the key to the main exit door and started to escape before we realised we still didn’t have the master of the new album. As the seconds ticked down, we led an audacious dash back into the room. As we burst back out into the waiting room with just 12 seconds to spare, clutching the prize, we knew we had beaten the system.
​
Good night Chippenham! You rocked!