It's only been a week since we experienced Manor of Lies by Morpheus Show - but with a new family adventure announced in time for Easter, we knew we had to get our blindfolds back out and see what mischief we could get up to this time.

As with previous games, Eggstraction goes for a completely different storyline, and this time threw us into a madcap heist, as we worked to try and steal a priceless Faberge egg from a heavily protected museum.

Once again, the outcomes of our decisions and actions, steered the action, and we somehow navigated an hilarious situation that involved a rabbit we called Boris, a rubber chicken and a yo-yo. How these items allowed us to steal the treasure, should be far beyond the comprehension of any normal person, but somehow the narrator managed to skillfully blend these articles into our narrative seamlessly.

Of course, being a game aimed at family players, the tone throughout was much lighter and comical than the previous games we have played. The story was very much told in a tongue in cheek style, and there was a lot of laughter to be had on all sides (we are sure that the Morpheus team must think we are mad by this point - but they seem to enjoy the experiences of hosting us - even if we do usually end up in some crazy scenarios!)

Once again - multiple actors  and sound effects added to the atmosphere throughout, and we completed the whole adventure in about 90 minutes, after exploring all levels of the museum, solving the puzzles and mysteries and locating the priceless egg.

Although these events weren't necessarily designed with Covid lockdown in mind, they have been a fantastic way to relieve the boredom, and experience some theatrical performances in a safe  and immersive environment. With people able to play from all over the world - we think the demand for these shows will continue long past lockdown, and we cant wait to see what crazy stories the team come up with next! 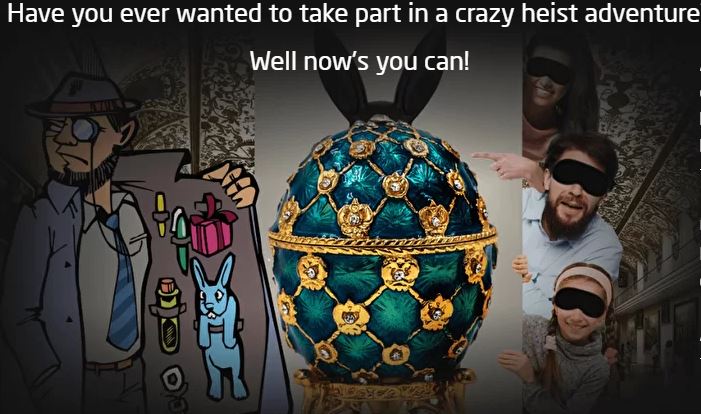 Morpheus Show UK are back with another exciting chapter in their range of "create your own" immersive events. Eschewing the horror and science fiction of recent stories, Manor of Lies is a classic murder mystery whodunnit in the style of Agatha Christie.

Set in the Regency period, we were invited to a social gathering by Lord Rochester, but as the bodies around us started to pile up, we were left with the task of trying to discover what had happened and most importantly - who was the culprit.

Like any good murder mystery, there was a cast of interesting characters, and these were played by several different cast members who alongside the narrator, managed to create a rich and immersive representation of what was happening. Don't forget, participants are blindfolded throughout the show, so the fact that scenes feel so vivid and believable, is due to the evocative and detailed descriptions and scene setting created by the team. The use of extra sound effects also add to the imagined reality.

As we have said before - these experiences are made all the better by actively participating throughout the show. Decisions made by the audience, directly impact the narrative  and direction, and in the end it's so much more rewarding knowing that as a team you have worked together to solve the mystery, apprehend the murderer. Not that we as a team didn't struggle a few times, but thankfully we worked together for an eventual conclusion. Our total experience easily lasted well over 90 minutes.

All in - this was definitely the most detailed of all the Morpheus Shows we have done - with lots of characters, ingenious motives and even a hint of sexual indiscretion. Who knew you could have so much murder and scandal whilst wearing a blinfold and sat in front of your laptop! 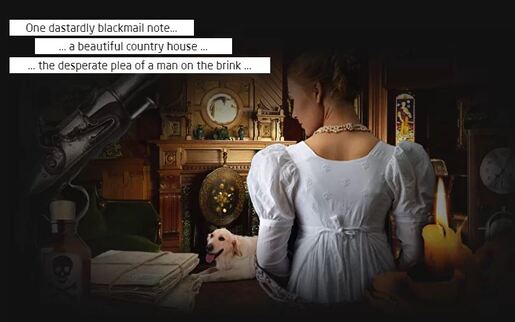 Have you ever wanted to be James Bond? Well now is your chance as Morpheus Show UK are back with another "create your own adventure", this time set in the world of international espionage.

After a quick briefing and an allocation of roles to each player, we put on our blindfolds, climbed into our best evening wear, and headed off to a swanky mysterious cocktail party.  From here on in, we had to work together as a team to solve an unusual mystery. The story and scenarios twisted and morphed around us, as we hopped to different exotic locations, with dangerous liaisons, unusual twists and a lot of very unexpected surprises.

Like before - we really don't want to give away too much about the story itself, but towards the end, things certainly took more of a science fiction style twist. But the whole thing was presented so eloquently, that each decision we made led our story to its overall satisfying conclusion.

​And thereby lies the beauty of Morpheus Shows. Things move and change so quickly, and it is up the skillful manipulation and improvisation of the narrator to make the proceedings sound natural and planned. How our narrator managed to guide 6 naked people the size of a house fly through a detailed hostage situation with a ravenous spider, was mind blowing! Talking to Morpheus afterwards, even they were surprised at where our story had taken us, but they successfully managed to steer the narrative back and make it all feel so natural!

One thing we have noticed over the last few games is that production values are getting bigger better with each story, and there were a lot of in game sounds effects and pre-recorded narrative that all blended in seamlessly with the live action unfolding.

All in, we really cant recommend Morpheus shows enough. If you haven't played one of their shows yet then you owe it to yourself to give it a go. They really are a great mix of immersive theatre, game play and personalised radio play - all rolled into one. Bet yet - you don't even have to leave home to experience it! 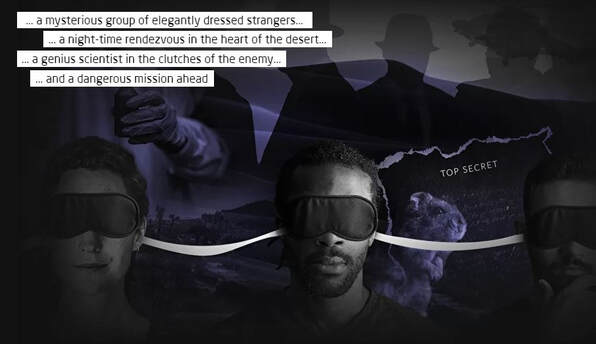 ​Locked Down by Morpheus Show UK

After playing All Hallow's Eve at Halloween, the team behind Morpheus Show Uk, teased us that they would be working on a new, more scarier experience. Sure enough, as the UK went back into Lockdown in November, the game Locked Down was launched.

We don't want to say too much about the story. Like the plot of a good horror novel or movie -  "you awake to find yourself in a strange place. Memories distorted - a jigsaw puzzle of violence and horror. But what happened? As you explore your new surroundings, the pieces begin to slot together."

The show then consisted of us trying to find out what was going on, what had happened to us, and more importantly as the plot continued, could we save the world from an unknown fate? Like any good horror story, we were a disparate bunch of players who all had to work together to escape. We actually played as separate individuals forced to work together with strangers, but the show would would work just as well with a group of friends.

And this is because the show can adapt to what is said and done, and the narrative reflects on the situation. In a gross, but funny scenario, the hallway ran with urine as one of us couldn't find the toilet in time. This probably wasn't in the original script, but was deftly referred to throughout the game, which just helped the believability of the environment and situation.

Like All Hallows, this experience was played out blindfolded in the dark, with all scenarios and settings relayed to us by our narrator, along with the addition of another live actor and some very impressive sound effects. We can't state enough how immersive this experience is, as although you don't see anything throughout the 2 hour run time, your imagination conjures up some truly terrifying imagery. This is due to the very evocative script, that plants the right images inside your brain to really make you believe you are there.

One final thing to add was this really was a far more adult experience than the previous one, including suspense, gore, blood, bodily functions and swearing. The tensions were certainly very high throughout, and all of us agreed afterwards that it was a totally believable but horrifying experience, that left us all a bit shaken even once the lights were turned on!

Like we said in our last review - it is hard to really encapsulate what these experiences are until you actually discover them for yourselves. Although they have escape room style elements they are far more theatrical than that, and are more like an epic horror radio play that you can control. Locked Down is currently booking into the New Year and we would highly recommend you give the show a go. You definitely wont regret it!

Do you remember the popular Fighting Fantasy books n the 80s? No - well then clearly you have missed out on a treat. These books were stand alone immersive stories that changed depending on what decisions you made along the way. At certain junctions, you would be offered several options and the story would unfold depending upon the choices made.

Well now imagine the same scenario but with players blindfolded whilst listening on a Zoom call, with a talented actor describing the scenes and rooms, and  narrating the adventure, while appropriate sound effects and noises play in the background. Only then can you even come to close to explaining All Hallows Ever by Morpheus Show UK.

But that makes it all sound so simplistic as although elements of the show are scripted (the descriptions of each room and the actions that happen) the strength of this show relied on the characterisation and improvisation of the narrator. At one point when presented with a spiral staircase, this reviewer jokingly said "can I slide down the banister to the bottom?" The narrator immediately described my descent down the staircase leaving the other players standing at the top wondering where I had gone. It all seemed so natural and didn't feel scripted at all!

We played on opening night with two complete strangers and over the course of 90 minutes we really bonded as we made decisions that impacted the outcome of the game. At one point there was a real despair when we thought that one of the team had been killed in one of the scenarios, which was soon replaced with genuine relief when their fate was eventually revealed to us.

Although based around Halloween and containing ghosts, witches and other demonic creatures, the show isn't particularly scary and could easily be played as a family group. The descriptions and scenarios are all colorfully presented, that it was easy to picture in our heads, where we were supposed to be. Depending on the success of this version the team are considering a more darker toned show for later in the year, and we are sure this would be just as immersive.

As it was - we just sat in the dark enrobed in an incredibly fun and inventive story that left us smiling throughout. In a time where scare attractions are closing and live theatre is dying on its feet, it was easily one of the most immersive and fun things we have done in ages.