We recently went back behind the ominous red door at Horror Escape London, and headed down into the basement to experience their latest game - Murder Mansion.

Like the other two games at the venue, Murder Mansion is set in a very detailed and well themed environment with a series of locks, puzzles, and hidden surprises that challenged us for the full hour. Yes we eventually escaped but it really was by the skin of our teeth.

We played as a group of 4 which was probably about the minimum size we would want - especially as there are moments where the team were split up and were exploring separate rooms and puzzles! Fortunately for the finale, we were all reunited for a number of tasks in the final room, and the big final escape.

The atmosphere and effects throughout the whole game, really helped build up the tension, so by the time we got to this finale we really were quite keen to escape. It didn't help that this scene was a genuinely theatrical experience which involved some very impressive effects and some live scares!

Murder Mansion is easily the most advanced of the three games at Horror Escape London, with an expansive range of scares, theming and challenging gameplay. We really cant recommend it enough! 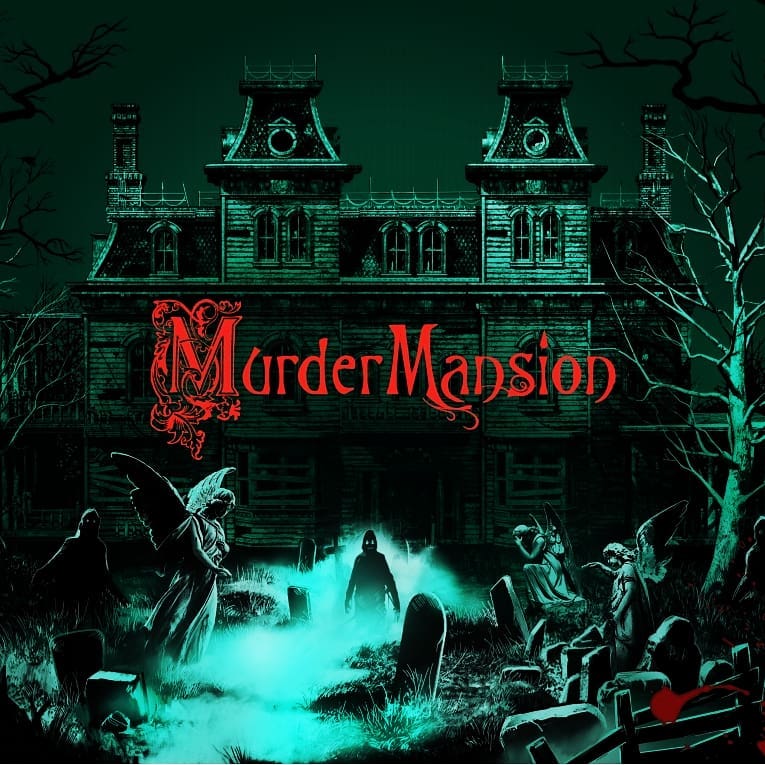 Cabin Fever is the darkest of the two rooms at Horror Escape and we were concerned when we arrived when our host said "Oh it's just two of you playing? Its gonna be challenging!"

But always ready for any challenge - we willfully allowed ourselves to blindfolded, led into the room and handcuffed! From here on in - it was puzzle after puzzle, as we tried to work our way round the room and solve all the clues. Alongside several combination locks and padlocks, there were also  physical puzzles where we needed to place certain objects in certain locations.

Of course - this room also has a number of secrets, and soon we were exploring even darker and creepier parts of the house and its garden, as the true nature of the abandoned cabin was revealed.

As the game continued we found the puzzles and their solutions to be quite diverse, and we particularly enjoyed the circular saw effect (although lets just say we felt a little vulnerable in the situation!)

As we got closer to the end of the game (there is no clock provided but an ominous voice announces the remaining time at regular intervals) we had hoped we had made our final escape - only to reveal one last room that needed to be completed. Fortunately we worked the puzzles out quickly and with just 3 minutes spare - we finished the game with one big last noisy scare!

We really enjoyed this whole experience which we think was really helped by our incredible host. She played a helpful American hillbilly girl and her character really added to the scenario and the tension throughout - especially when she mocked us when we did something stupid!

So if you are looking for a dark and creepy experience with lots of dark secrets, then we would definitely recommend this game. 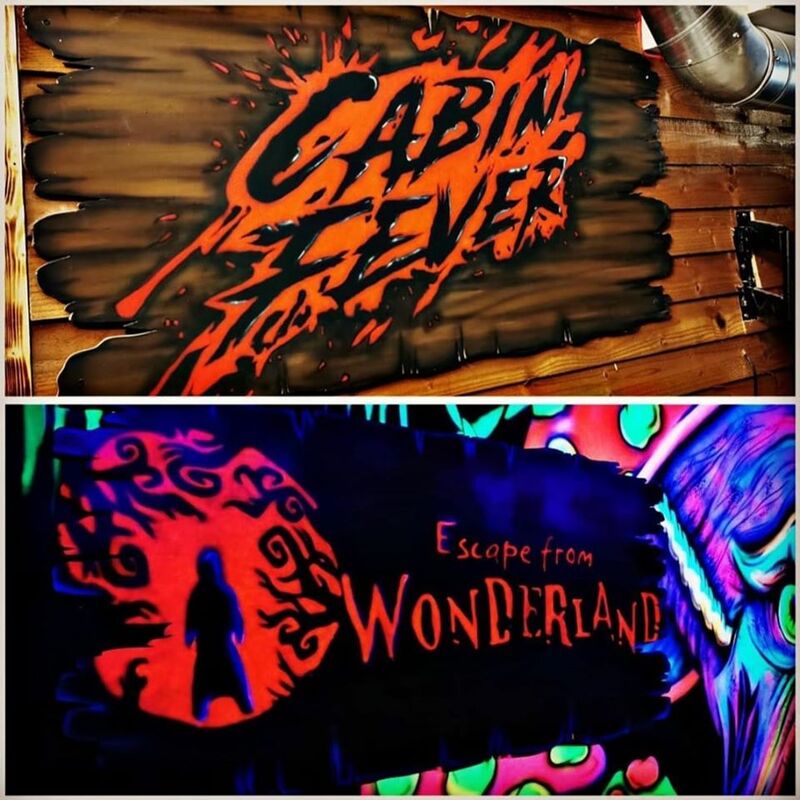 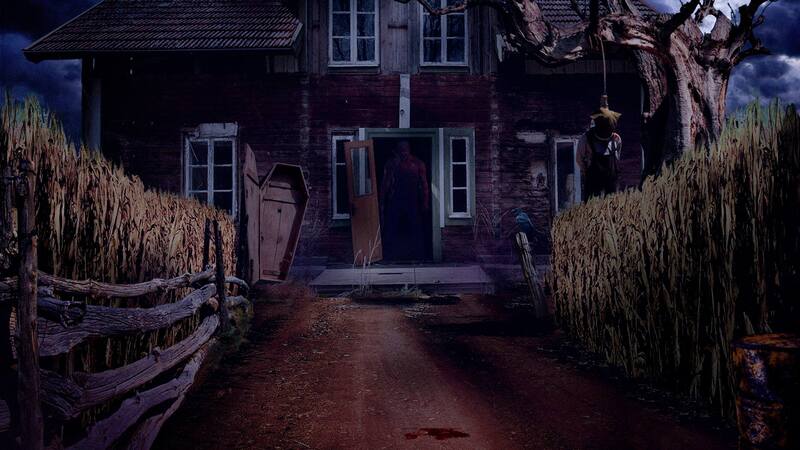 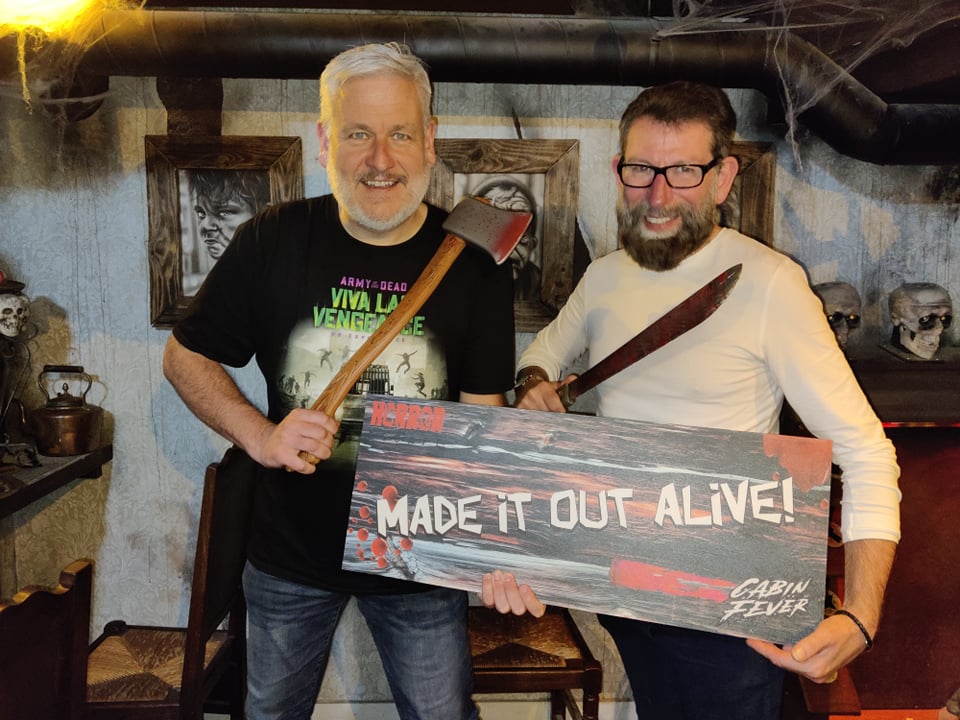 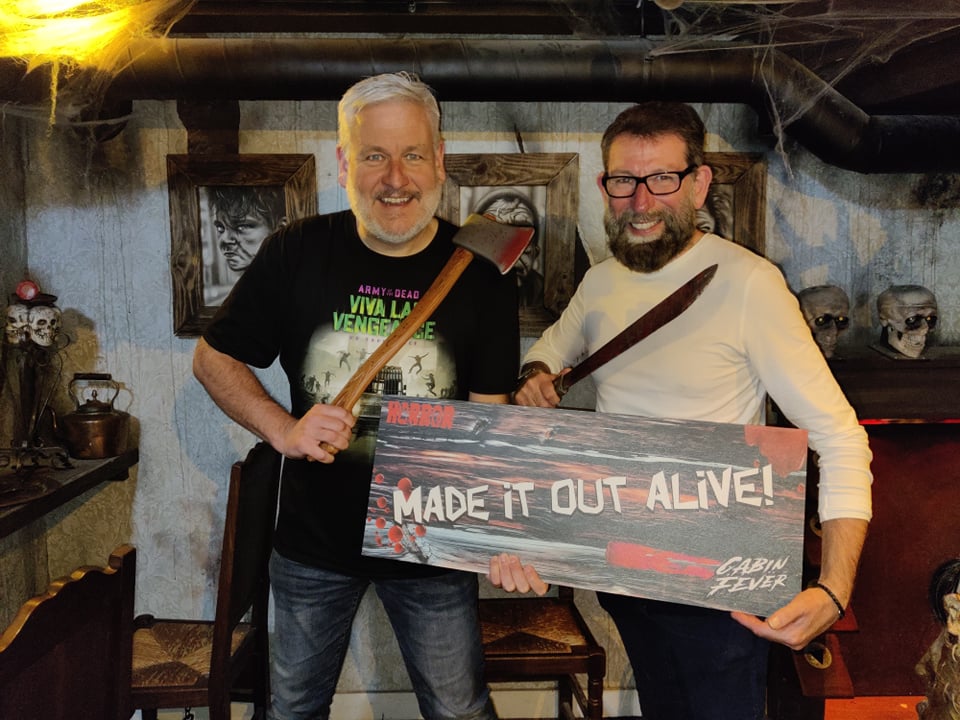 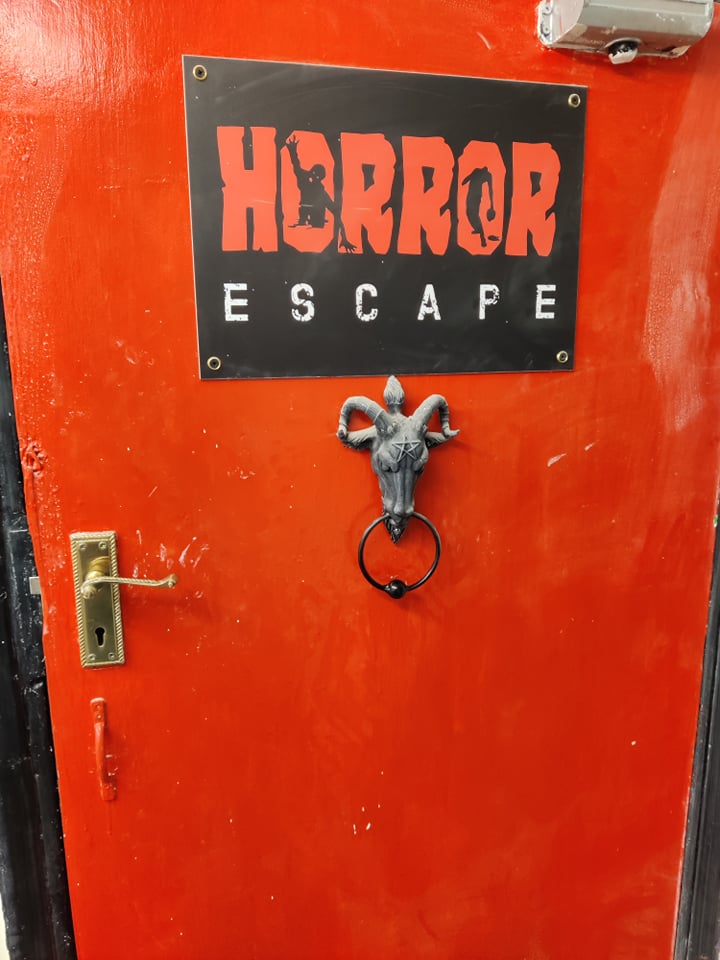 For our second game we called in the Hollywood cavalry and were joined by Bobby Roe and Zack Andrews, the Director and writers of The Houses that October Built (aka The House Halloween Built and Blue Skeleton in the UK). We'd met them for a catch up earlier in the week, and being big scare attraction and escape room fans, we knew they would enjoy this one.

Clearly based on the the classic children's story, this room threw just about every reference it could at us including a slide down a rabbit hole, an upside down room, the Cheshire Cat and more. Each room had a series of puzzles and games to unlock which would reveal more and more secrets as the game went on.

The puzzles were mostly logical (we struggled a bit with the memory map puzzle) and each new reveal was a surprise. We especially like the hidden door that took us a while to locate even though we had heard it unlock!

As you can see from the pictures below, the room uses a lot of UV and dark-light effects and this did cause a bit of an issue with one puzzle where our eyes couldn't quite work out the colours in the puzzle. It was a minor inconvenience though and saying that, we still managed to escape Wonderland with ten minutes spare.

Although not as dark as Cabin Fever in terms of theme and scares, we really enjoyed this room. There was a lot to do/search for and we liked the various room reveals throughout the show. Definitely another great game from Horror Escape! 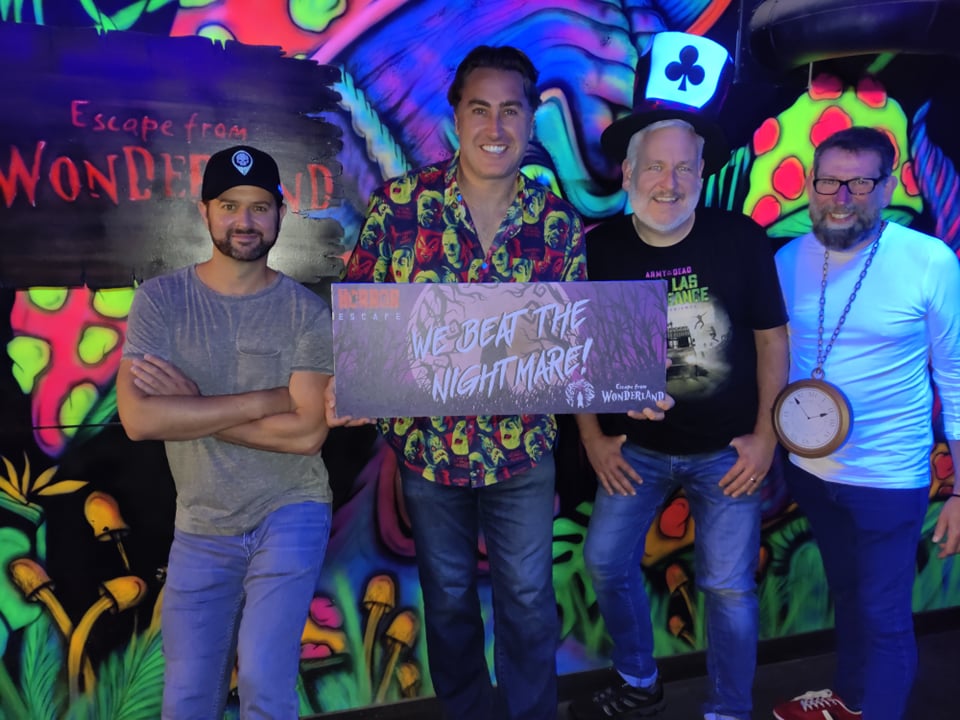 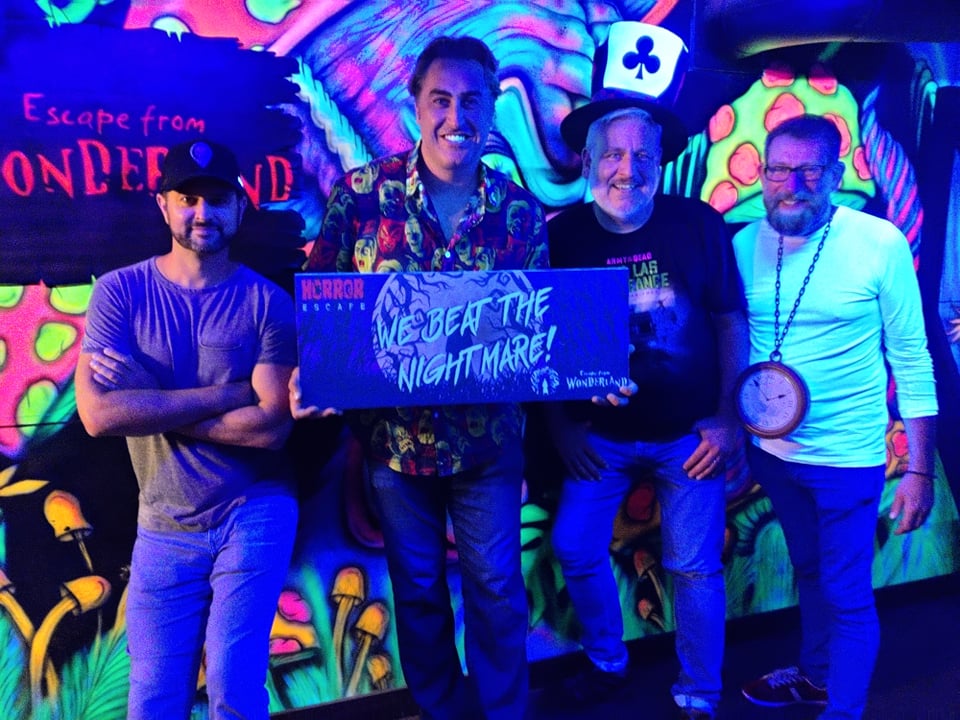 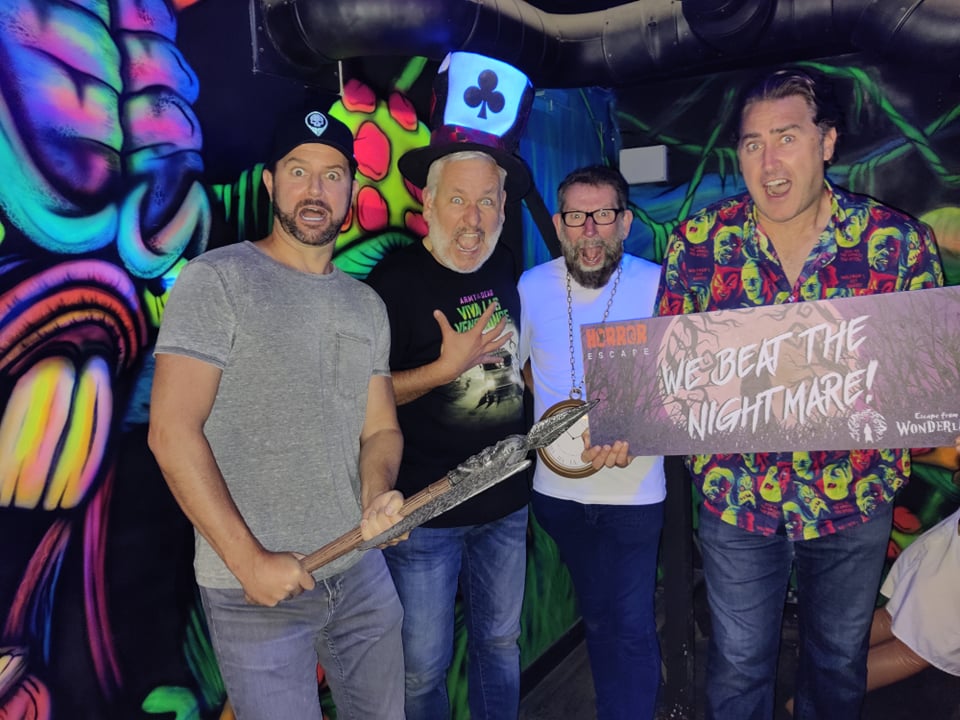 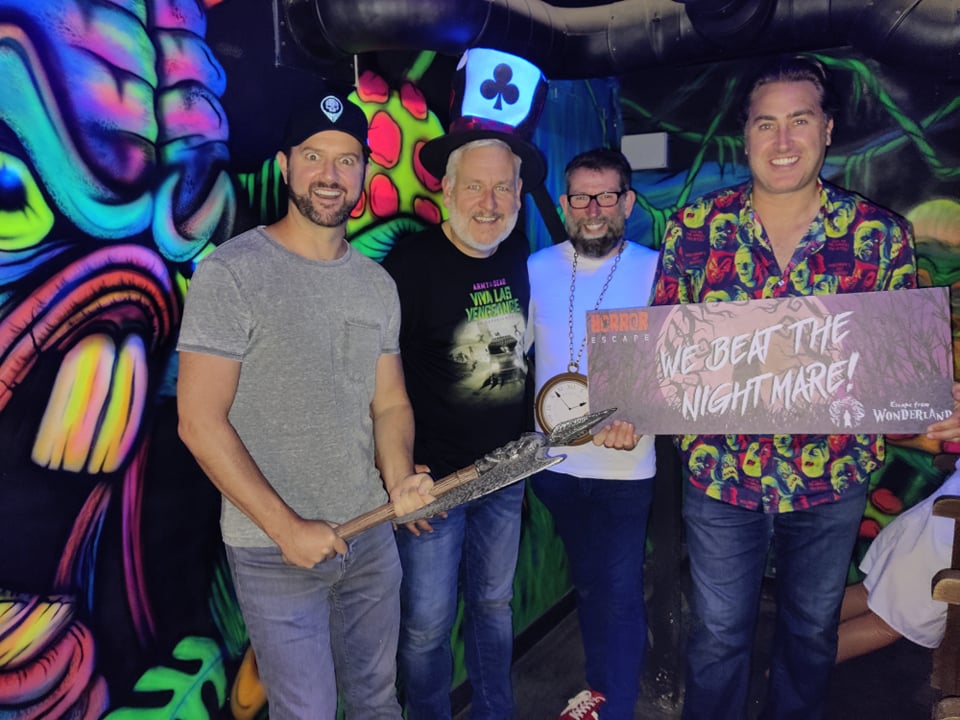 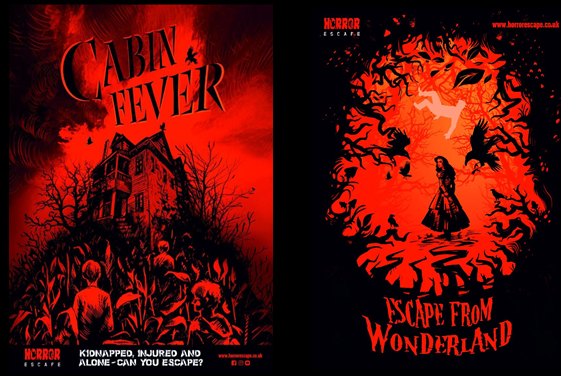