Set up as a ghost hunting YouTube show, Follow Me is an involved and chaotic mix of murder mystery and Most Haunted. The cast of 4 ham it up as excited amateur spook sleuths filming their 100th episode in an abandoned mansion house.

The intro and health and safety briefing was given by an over-enthusiastic volunteer named Gwyn whose mannerisms and personality were enough to put the creeps into us all. The briefing room itself was clinical, obviously being an unused office with fluorescent lighting, a pin-board which looked like it had info on the house, and a projector screen. We were shown a recording of clips from previous shows before being introduced to the presenters, two unlikeable characters, plus, randomly, a council worker. They explained the premise that we were in a house abandoned since the 70s due to mysterious circumstances around prior owners & occupiers.  There was a bit of a disconnect between the idea that “nobody knew what happened” when there was a representative of the council standing right there with a clipboard.  Almost immediately they began squabbling, behaviour which was uncomfortable to witness in a room full of strangers. The intro itself took too long and we started to feel a bit bored.

We were split into four teams of two, and we were taken off to get fitted with ghost hunting tech, consisting of a head-mounted GoPro and torch plus a couple of old school digital cameras. We were instructed in their use and how to spot ghosts. When we rejoined the group it seemed they had received some sort of intro to the mysterious experiences in the house, but our group had missed our briefing.

Towards the basement we marched, with more bickering between the cast, until finally we reached a dimly-lit room. Scattered around were various symbols, books and items, all of which we were told might be important but which never seemed to match up to anything.

An hour in, another dimly-lit but otherwise sterile room, and more arguing. By this point it was hard to tell if was part of the script, or a genuine argument.  It was definitely a distraction in the quest, and through a plot point that we must have missed, one of the team ended up processed by a demon.

Finally, we hit the set-piece and the only aspect of the event that can be truly described as approaching scary. We entered a "hidden room never seen before" within which sat a rudimentary Ouija board surrounded by a variety of props. Members of the group were brought forward to attempt contact with spirits through the board, with differing results. Although Jimmy tried hard to disguise his moving the glass around, this was not the best Ouija reenactment we've experienced.

Suddenly, Gwyn appeared, wet and babbling incoherently and the reason for the constant arguing throughout came to a head. It was like the show had been signposting loudly that the cast actually did love each other, despite the bickering.  And so in a case of love really does conquer everything. the demon was cast out and normality returned. We exited the basement and went back to the briefing room for the cast to take a bow.

The event lasted 2 hours, but genuinely felt longer. Being in basement rooms while actors yell at each other was not always comfortable and didn't move the story along. There was very little connection between the things found during the exploration  and the final set piece. And sadly, despite the impressive nature of the venue, the abandoned mansion was far too clean and orderly to have been vacant for 50 years!

We really understand what they were trying to achieve, and have to commend the team for doing something so unusual. Parts of the show were really effective, but we think they need to work out the kinks before setting off on their upcoming national tour. 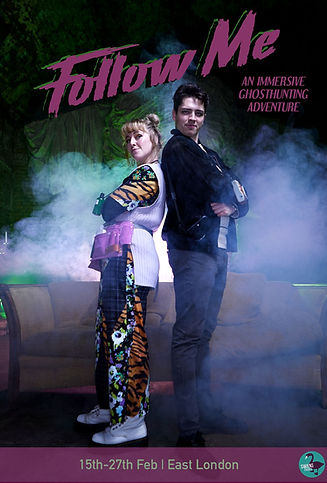