​Very scary
The strobe lighting was excellent and it stuck to the basics of a horror show but with the modern day scares and its usual historical element thrown in. Its not to be missed!

A year round attraction, York Dungeon offers an immersive step into the gruesome history of York.

With the hallmarks of the dungeon franchise evident, such as the familiar (but not so friendly) faces of the plague doctor, the torturer and the judge, York Dungeon blends the expected with it's own unique history perfectly.

New for 2018 is Hide and Shriek , where we got to meet Margaret Clitherow, a martyr who practiced Catholicism despite it being illegal, and eventually being hunted by parliamentarians. In this scene, there were a few sudden noises as the law tried to bang down the door, which helped build some tension and led to her concealing us in the next scene, (which effectively led us into the mirror maze).

Like other dungeons, York Dungeon blends aural sensory overload with a simple switch of the lights to create tension, sometimes making even the biggest and bravest of the group jumpy. The attention the detail within the sets, enthusiasm and gusto from it's actors, and occasional adult humour make it fun for the whole family.

York Dungeon packs a punch when compared to it's big brother in London, and is certainly one to visit.
​ 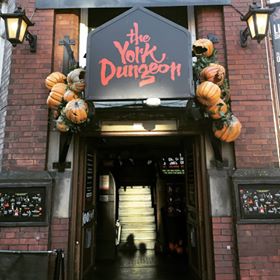 ​Now we all love Friday the 13th right? Of course we do! And, to mark this special date we were itching for something scare themed to do. Thankfully, York Dungeons had invited us to the 2018 launch of York Dungeon Lates, their adult only show, advertised as ruder, scarier and “adultier.” We had visited York Dungeons very recently for the launch of the new Dick Turpin story and show, so just how adultier was Lates going to be?

Then we met the plague doctor’s assistant and the innuendos started to fly. The guy playing the assistant was very lively, especially when he got on top of the dead body he was performing an autopsy on. Let’s just say that necrophilia is alive and well in York!

Other scenes played out pretty much unchanged, such as the Golden Fleece and The Night Watchman leading into the Labyrinth, but as we passed into the Torturer, we started to notice more differences, including an extra actor and more interaction with the audience.

And then, something brilliant happened - the Courtroom. This scene usually just has the judge looking down from his/her dock sentencing us but this time we had a veritable double act. What happened next, saw the barrister and the judge playing off against each other while pulling visitors up for sentencing. The scene was genuinely hilarious, with the entire group howling with laughter.

We’ve mentioned that some of the scenes were the same as the daytime show, and we have two points to make here. Yes, "Lates" could have been a lot ruder, and "adultier"if it had wanted to, but it was still extremely enjoyable. We had an absolute blast from beginning to end, and the actors were all completely on point throughout.

We have always enjoyed York Dungeon, and with the addition of the Lates event, it really is worth a visit, by day or by night. There were of course a few surprises on our visit, but you’ll just have to visit, to see it all for yourself! 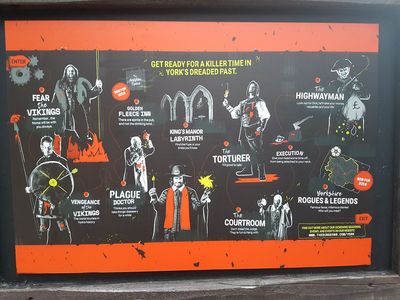 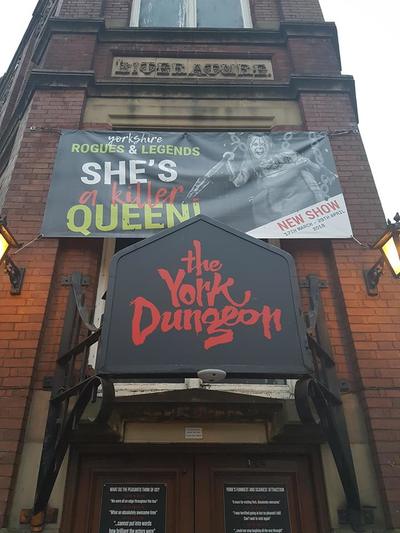 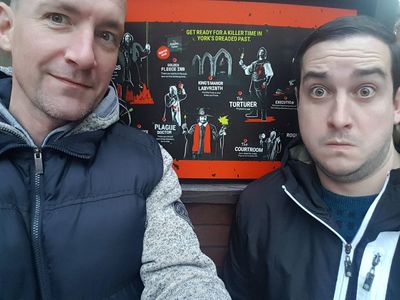 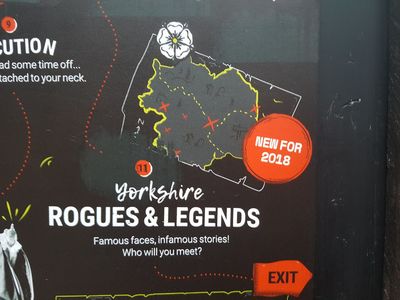 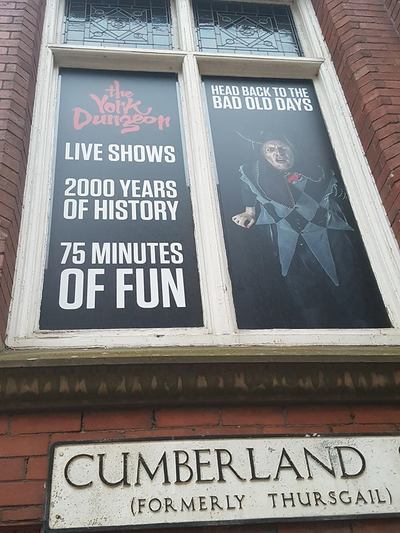 While in York, we decided to pop into York Dungeon to see what their Home of Halloween makeover would bring. The attraction has recently seen a whole new show added (see review below), so we imagine there wasn't a huge amount of budget for a new show or experience for the season.

The venue was of course decorated with pumpkins throughout and these glowing jack 'o' lanterns really added a spooky Halloween vibe to our visit. None of the main shows had changed (or had appeared to change) but we still had one of our best runs through in recent years. All the actors were on fine form and really throwing themselves into their roles.

York is one of the smaller UK Dungeon attractions, but always packs a punch whenever we visit. If you haven't experienced it yet - we would definitely say you should add it to your list! 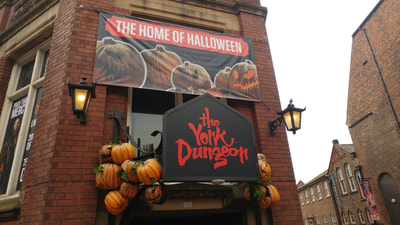 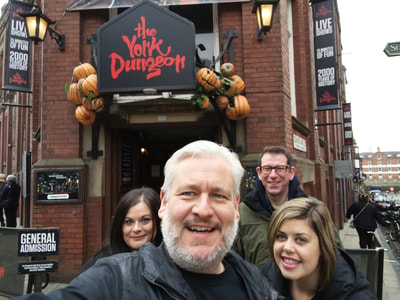 Review - Dick is Back at York Dungeon
​

A beautiful, sunny, early evening in the historic city of York, with tourists all around enjoying the weather and the stunning scenery. ScareTOUR however, were about to delve deep beneath the streets of York, into the York Dungeon, to witness their latest addition to the show, Dick Turpin. Did we like Dick? Read on and find out.

The evening started with a tour of the regular Dungeon which we were looking forward to as it had been a little while since our last visit. We weren’t disappointed. After a wine reception and meeting the team behind the Dungeon, a group of 16 “peasants” ventured in.
​
The Dungeon website advertises the scenes you will go through so we don’t have to give too much detail, but, we have to say we laughed and were entertained by the actors all the way through. The Dungeons are a family (if you have brave kids) attraction so, there is a mix of comedy, local history, education, detailed sets and a few scares too. We repented our sins to a strange nun, roared like Vikings, met a flaunty doctors assistant, the executioners assistant couldn’t pronounce names (ral peh huh), the night watchman was cluelessly funny, the judge was relentless and hilarious, the torturer was loud and demanding, the scene in the Golden Fleece pub was very creepy and the witch finder was brilliant.

And in between there was Dick Turpin, the new/old boy. There used to be a scene in York Dungeon where Dick Turpin was hanged; an animatronic prop fell through the roof, so how are York Dungeon retelling the story?

The group boards a stage coach and are met by the coach hand who tells the story of Dick. The coach starts moving and the sound effects make you feel like you are genuinely moving down an old dirt track. Your coach is ultimately going to be held at gun point by the infamous highway man who tries to enter and take your possessions. What then plays out is a clever cinematic scene outside the coach complete with special effects.
​
And that’s all we can say so we don’t spoil anything. We had a great night and it was good to talk to the team behind this very entertaining event.