When we last visited York Dungeon, we commented on how well it stood up against its larger brother down in London. Lacking any rides, the attraction makes up for that with a tightly packed tour of some of the best bits of York’s violent history and a few unique scares along the way.

What surprised us the most this year is that many of the exhibits have been swapped around and are now visited in a different order and this has certainly refreshed their presentation. For example – Guy Fawkes was originally one of the last scenes and, although factual – was quite a let down as it slowed the proceedings. Now placed in a smaller chamber near the start of the tour, it proved to be fascinating as well as gruesome. Maybe when they moved the models they cleaned them up a bit but the tortured Guy Fawkes model with his innards spilling everywhere looked VERY realistic and “wet”!

Through each show, the actors interact well with guests and their delivery always remains on the humorous side while they gently mock their victims. And it seems everyone gets a chance – from plague victims, defendants in the dock through to torture victims, there’s a real equal opportunities scheme here – NO-one is safe!

Finally we come to this year’s new scene – Witches Burned Alive. Technically this show starts identically to the Bloody Mary in London with a “witch” being chosen from the crowd and strapped to a funeral pyre for burning. What worked well though, were some extended periods of blackness that the actor was able to use to move around the set unseen and surprise and startle guests. Using the same techniques as the Ghosts of York show, a good few jumps are created even before the fire is lit.

The burning and the “final reveal” remain the same but then York has one final trick up its sleeve. As the room descends into darkness, we are all sentenced to the same terrible fate and an extra effect occurs that surprised everyone and really left us feeling like we were surrounded by fire. Having experienced this – the London show will never be the same again!

Having experienced York Dungeons 2 years in a row, it was amazing how fresh the whole experience felt. This is partly due to the moving around of scenes but also due to the amazing acting talent working there. All characters really appeared to be enjoying their roles and the extra “flourishes” each of them added to the usual scripts were both clever and very entertaining. Having been judged as the accused in the court scene “many” times at various Dungeons, this visit was truly hysterical. His historical jibes mixed with broad topical and pop culture references had everyone in stitches especially as he made a grown man mince round the dock while singing “My milkshake brings all the boys to the yard”. Crude at times, definitely a bit non pc, but the Dungeon gets away with it as they do it with such style!

Talking to the attraction manager afterwards, it’s obviously clear that they are justifiably proud of their attraction and they are already looking forward to what they can add or change in the future. That’s probably the biggest beauty of the Dungeon attractions, they do constantly evolve and you know that on each visit there should be a least one new thing to experience.
York Dungeon isn't the biggest or the grandest of the UK based Dungeons but always packs a punch whenever we visit. Although it doesn't have any rides, it relies on tightly choreographed and clever shows to thrill and scare the visitors in equal measures.

The new show is now open daily. For more details check out the official website www.thedungeons.com 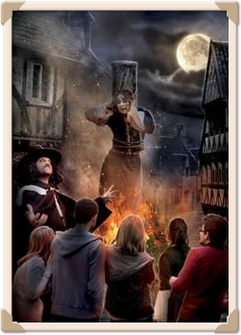 All images copyright York Dungeon and Merlin Entertainments
This review was written by Michael Bolton and originally appeared on Haunted Attractions UK.

Also experienced York Dungeon? Why not leave us a review. Click here for more details.