Following the Coronavirus crisis of 2020, Amsterdam Dungeon has been the first European scare attraction to reopen, with new social distancing measures in place. Fortunately one of our readers went along to tell us how it was.

Firstly it would seem that certain shows have been cut from the tour completely - including Magic Musico, the Mirror Maze, the Tavern and The Witch Burning. From memory - these are quite small rooms, where it would be very difficult to keep guests safely distant. In the other rooms, to ensure guests do stay apart  - there are markings on the floor indicating where to stand, and all the actors keep a safe 1.5m distance from guests when performing.

One upside of the smaller crowds and social distancing is that guests get to experience some parts of the show alone. We got separated from our party last year through the Gallow Fields, so know exactly how scary this section can be. There is no safety in numbers through this part now!

All in - it's interesting to see how Amsterdam Dungeon have adapted to the rules,  and we are sure this is being watched closely by all the other European Dungeon attractions which will want to open as soon as the authorities allow.
​ 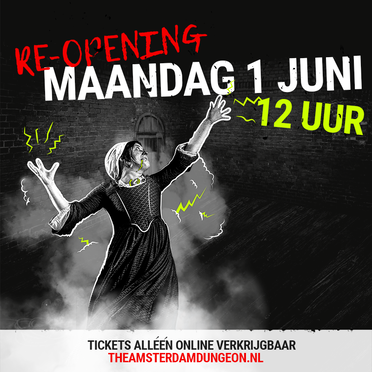 Very good also good use of the social distancing measures which make it very scary as you were split up or go completely alone only downside is that some scenes are closed.

​The Shows magic musico, The mirror maze , witch burning  and the tavern were closed
After the courtroom an actor from the gallow field lead us through the mirror maze and the witch burning also some interactions were left out such as the torturer they demonstrate the Instruments while your in the cage. The actors stand 1,5 meters apart from you which is still scary in my opinion such as the ghost scene at the end is still scary. Also you have to Stand on Symbols to keep distance which as first described scary as you were split up or go completely alone. Such as the forest area.

There have been quite a lot of changes since we last visited The Amsterdam Dungeon two years ago, with several new shows and a general move away from historical fun to some genuine frights.

The seasonal show, Seance, has taken over from the generic autopsy scene that can be found within all the other Dungeons. Instead of a medically accurate description of the plague and the medical practices of the time, the show area is used as scene setter for the main Seance storyline. The names and characters may well have been genuine historic figures, but like the London Seance show, this is purely a piece of theatrical storytelling with a couple of great scares.

A couple of shows later (mirror maze and courtroom), and we were faced with another new show to us - The Gallow Fields, which we can now categorically state is the scariest show in any of the Dungeon attractions, ever! After a small introduction, the group of guests were split up and sent through two separate pitch black routes through the forest. With claustrophobic corridors, body bags, a couple of crawl spaces and a whole array of lighting and sound effects - it was the closest to a full scale scare attraction we have ever experienced in a Dungeon. Add in the sudden appearances from the main actor throughout, and the area just rang with the screams of terrified guests!

As the show continued (and we tried to get our nerves back), some of the more regular experiences entertained us, with the whole show eventually finishing with more scares for Murder on the Zeedijk - the classic Dungeon "ghost" show as seen in the Witches of Warwick and The Haunting at Alton Towers.

We genuinely loved all the scary elements of the attraction, but we do feel that perhaps they have moved a little too far from the regional history and story telling we come to expect, and have focused a bit too much on just being scary. We aren't complaining, as we had an absolute blast throughout, but this could alienate some of the tourist market the brand have come to rely on...

We visited The Amsterdam Dungeon to see what their Halloween makeover would bring. Without a new stand alone show for the season, there were a few subtle changes along the way, including some terrible Halloween themed jokes from the Judge and of course a number of pumpkins and Jack O Lanterns scattered about.

As it is - the show is so much fun anyway, that it really doesn't need the much else. Why not check out our review below for more details.... 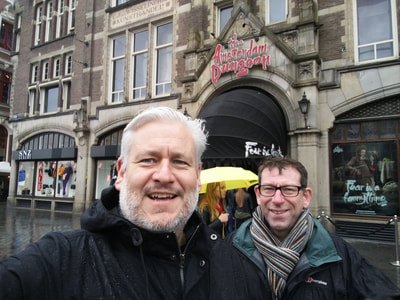 It’s been a few years since we last visited the hustle and bustle of Amsterdam. But when the team made a visit, the Amsterdam Dungeon was at the top of our to do list. The Amsterdam show has been one of our favourites since our last visit in 2013, however there have been a few big changes since our last tour. The first change we noticed was the language barrier….there wasn’t one! Instead of the original method, using a multi-lingual cast who would switch languages throughout the scenes to ensure most the audience understood, we are now treated to a full English show. Upon arrival you are asked whether you would prefer a Dutch led show or an English led show, we enter our chosen language ‘jail cell’, enjoyed a short projection story whilst waiting for other victims and away we go with a fully English spoken tour. For us, this method works better than our previous multi-lingual shows, however this may be due to the ScareTOUR team hailing from England. The German and French tourists opted for the English speaking tour as opposed to the Dutch speaking tour, meaning for some guests there is still a language barrier.

The Amsterdam Dungeon adopted the ‘fear is a funny thing’ tagline similar to the UK attractions, however, this is still one of the scariest of the brand, with some rooms dedicated solely to anticipation and impact scares. The morgue room in between two main show scenes had the whole team screaming in fear.

The second big change to the Amsterdam Dungeons since our last visit is the alternative ending. Their roller coaster finale is no more, and instead has been replaced with two new show scenes and a Dungeon Bar. Unfortunately the Bar is only available on Friday and Saturday evenings which is an unusual decision from Merlin, given how successful the new bars in Blackpool and London have become, however the shows finale more than made up for it - ‘Murder on the Zeedijk’ (Zeedijk is a street name in the middle of Amsterdam).

This show is basically a Dutch version of the ‘Witches of Warwick’ show finale at the Warwick Castle Dungeon. However the impact scares seem to pack a bigger punch to have the whole group screaming. Another positive was the music used after the show had finished. Instead of the awkward silence after the last show of the Warwick or York Dungeon or after the shuffle out into the gift show after you have Dropped Dead on a drop tower at Blackpool or London, here they use a great dramatic, heroic soundtrack that gives the feeling of accomplishment at heroism after you have escaped the Dungeon. It's a a simple but extremely effective use of a great soundtrack that we wish the UK Dungeons would adopt.

The only negative point of the whole experience was the penultimate new show scene (which isn’t even listed on the Amsterdam Dungeons website). This was a very large room with a few beds and a monologue from an actress with nothing much else. A big waste of space in our eyes which we hope will one day hopefully become a show as fantastic as all the other scenes at the venue.

Once again we had a fantastic visit and it remains this reviewers favourite Dungeon. The actors perform extremely well using their second language and the scenes (bar one) are all extremely fun with a few being very scary. We also need to mention that the best scene from our last visit still remains our favourite scene from all Dungeons. We still live in hope that the UK dungeons recreate the ‘Hell of the Batavia’ scene. The set, the smells, the effects are all beautifully executed in this room to make you feel you really are on a sinking ship!