So, when you have visited an event that is nigh on perfect, how do you write a review that gets across just how amazing it actually is? It's a difficult task, but we will try to keep the hyperbole to a reasonable level.

Horrorland Park is located in the mountains a few hours North of the city of Barcelona. As we got closer to the park, we could see more and more snow on the tops of the nearby mountains, and in fact the temperature bottomed out to a mere negative 2 degrees. Ironic that our coldest event this Halloween turned out to be in a hot country such as Spain!

But we were prepared for the cold, and as we rounded the windy roads, the full majesty of the location hit us. Nestled in a valley is an enormous discarded power station which just works as a perfect backdrop to the attraction itself. Although the mazes and shows are all held in more modern buildings in front of the main power station, it still makes for a jaw dropping setting.

Once inside, the layout and infrastructure of the park is like something that most events could only dream of, with a series of hangers and buildings leading off of a central street, and a large indoor section for more entertainment and the food court. The atmosphere throughout this area is loud and aggressive, and it is populated by several roaming characters who interact with the guests up close. But what stood out for us, was the central stage/ hub area that hosted live shows and events throughout the night. These ranged from the butcher characters creating a bidding war for human guests, through to a zombie invasion that had the zombies all coming back to life to dance along with Thriller!

Each show was accompanied by impressive lighting and sound as well as pyrotechnic effects and a whole swathe of actors. Clearly no expense has been spared with populating characters for these shows, and they really added a sense of occasion to the whole event.

Of course, a park can have great atmosphere - but an event like this lives or dies on the strength of its scare mazes, and we have to report that all five mazes were some of the best and imaginative we have seen in years. The sheer diversity in scares, sets, themes and styles across the mazes is outstanding, and its really hard for us to pick out a favourite.

Clown Town was our first maze and could be described as a generic clown maze with 3D glasses. But that would be a complete underestimation of the effects and scares throughout this very long maze. As well as lively and terrifying clowns, the team made great use of very effective animatronics that had us leaping to escape, as well as a number of unique scares that shook the whole group (bungee clown we are looking at you!) We were told afterwards that this was the "starter" maze and that we should expect some more intensity as we progressed onward!

Our next maze was La Casa del Bosque (The Cabin in the Woods) and could easily be described as the most "standard" haunted house attraction at the park. Saying that - the actors were so forceful throughout, and there were a number of great scares that had members of the team dropping to the floor in fright (thank you tree creature - and the least said about the teddy bear in the attic - the better!) The sets and theming throughout were top notch and we couldn't find anything to fault this incredible maze. Surely this level couldn't continue with the other mazes?

La Termica (The Thermal) is a maze designed round the history of the abandoned power plant, and the mining that used to happen in the region. Kitted out with miners helmets, we were forced into low dark mineshafts filled with grotesque characters and creatures. This maze threw everything at us including an insanely intense strobe maze cage section, with the creatures climbing up and over to try and attack us. The maze was chaotic, loud and SO much fun!

As we entered Matadero we were asked if we wanted to experience a more personal version of the show, and being gluttons for punishment we all said yes, and were given a couple of glow band necklaces. Themed around a meat processing factory/slaughterhouse, this attraction was designed to makes us feel what it must be like to be an innocent animal in an abattoir. Throughout the attraction we were pushed, manhandled and jostled quite forcibly with chainsaws and other instruments of torture shoved in some very private places. But what of the "necklaces"? These were used so the actors knew who to single out of the group and be given special treatment to. In one scene we were branded using a real tattooist gun (just without the needle but we could feel the pressure and the buzzing.) In another room we were "cleaned" with compressed air that was shoved down the back of our jeans and into our underwear. Once released - we had to escape through a confusing maze like section with the actors just chasing and attacking throughout. Totally bonkers, totally terrifying but incredible fun!

The final maze attraction is Survival Maze Battle Royal where once again we were given glowsticks, and as we entered a TV studio with all our fellow competitors, all we needed to do was make it to the end with our glowstick intact. Of course the 8 serial killers throughout this attraction stalked us endlessly and only a few of us actually survived by the end. The maze felt like a cross between Anarchy Live at Fear at Avon Valley and Hide Run at Oakwood, but with the intensity and craziness dialed up to 15!

Included in the entry price is a zombie paintball shooting experience that uses similar technology to Zombie Outlaw at Farmaggedon. There is always a thrill at shooting "live Zombies" and due to the walking nature of this experience, we felt it was a bit more immersive than the trailers at Farma. Of course - the trick is to measure out your balls and make sure you ration them throughout the experience!

The other big attraction is Psycho Extreme, which we were lucky enough to watch a "patient" put through their paces in this solo 18+ experience. The whole thing reminded us a lot of The Clinic at Walibi Holland but played more on "wordly" scares instead of covering Heaven and Hell in the afterlife. Obviously being extreme, there was a lot of manhandling, some partial nudity and a LOT of aggression throughout. Fortunately for us - the event was so popular that it sold out months in advance, but a few of the ScareCON crew managed to do it and they came out wet, smelly, shoe less, and a bit shaken!

In the indoors food court and bar, there was a well stocked shop selling a load of Horrorland merchandise and around the walls were a number of fun twists on classic fairground games (for the hoopla we had to get our hoops over moving skeleton hands, and for the basketball we needed to get brains back into zombie's empty heads!) The games were great fun and with a free 5Euro credit from parking - we all had a chance to win. The smallest prize ironically was a poo emoji badge - truly a "shit prize!

As well as the mazes and the shows, the park is also home to four mini escape room experiences. In fact it is actually home to 16 experiences as each them has 4 identical rooms which are triggered at the same time. So not only are you racing to get out, but you are racing to beat the other teams. Each of these mini escape rooms were perfectly designed with a number of really unique effects. For Subway the whole room was moving like an actually subway train and for Elevator, we could feel the room moving as if we were gong up and down in a lift shaft. Each room is cleverly designed so that it doesn't need to reset for the next group - ie in Torture, a key on a chain passed between two prison cells goes from Cell 1 to 2 in game 1, but then goes from Cell 2 to 1 for the next group. Clearly a lot of time and effort has been put into all their games, and we escaped each one in the nick of time.

So, having escaped the escape rooms, been tormented in the mazes, watched the shows, shot the zombies etc, this would generally be the time to call it quits and head back to the car park. But no - not at Horrorland. Once all the mazes are closed, every actor and character from the park join in for an impressive parade down the main street. With such a big cast of over 150 people, it really is such a big show and genuinely wouldn't look out of place in a Disney theme park (well apart from the gore, partial nudity and chainsaws!) With motorbikes and cars all included - the parade leads to one end of the site, where a massive fireworks display ended the night to the thumping beat of the This is Horroland theme song.

Even with the park closed and the fireworks over, the actors spent ages roaming around and tormenting the guests - clearly loving their characters and trying to get as many scares as they could. It was now 12.30 and minus 2 degrees, but the scares kept coming!

So there we have it - we genuinely hope that this review has got across how awesome Horrorland was, and how much fun we had. We visited as part of a ScareCON arranged event, and the other park operators and attraction owners were all amazed at the attention to detail and professionalism on show across the whole event. What is really hard to believe is that this is only its second year! God alone knows what it will be like once it becomes even more established and more is introduced to the event. As it is - we finished our Halloween on a complete high, and we would urge anyone to beg, steal, or borrow to visit the park next year. We now have a new annual "must do" event,  and will be back to soak up the incredible atmosphere and scares of this stunning scream park for years to come! 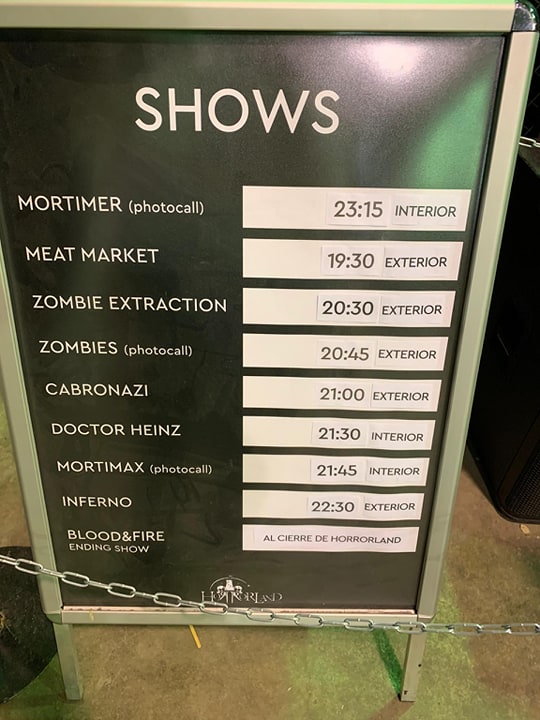