When Merlin Entertainments took over the running of the Blackpool Tower, it came as no surprise to hear that they were adding a new Dungeon attraction. Now seven years later – The Blackpool Tower Dungeon is still doing well, and in 2018 has seen some new additions to the line-up.

The permanent show for this year is Viking Invasion, which is a fun audience interaction show that replaces The War of the Roses. We felt the Viking show had more impact than the previous show and was very reminiscent of the Viking shows we know and love from York Dungeon (flying arrows, collapsing walls and the Dungeon’s popular “talking head” effect.) It’s a fun show with a couple of good jumps throughout.

But if we wanted real scares – we needed to head to the Corridor of Curses (the seasonal makeover of The Labyrinth mirror maze.  The whole attraction took on a much darker and atmospheric ambiance with lowered lighting, a smoky atmosphere, some beautiful set design and one truly terrifying jump scare that had us leaping to get away. Yes, we mean it! One of the biggest scares of our tour of Blackpool events came from inside the Dungeon – which is no mean feat. We would love to see some of the other UK dungeons replicate this makeover in the future.

Of course, the Dungeon is also home to all the usual shows such as The Judge and The Torturer, but all the actors were really giving there all, with over the top performances throughout. Our favourites being the anatomy doctor who gave the whole character a gleeful sense of mischief that left us laughing and squirming in equal measure, and the hilarious “lift keeper” in Descent, who had a wicked sense of humour and a sharp wit about her.

It’s no secret that we love all the Dungeon attractions. Even though they aren’t usually that scary – we enjoy the horror and humour element to all the shows and love seeing the unique different variations at different venues. So, too then have a couple of good scares in the middle of our visit was just the icing on the cake! We stumbled out into the Tavern having enjoyed every minute of the current line-up. 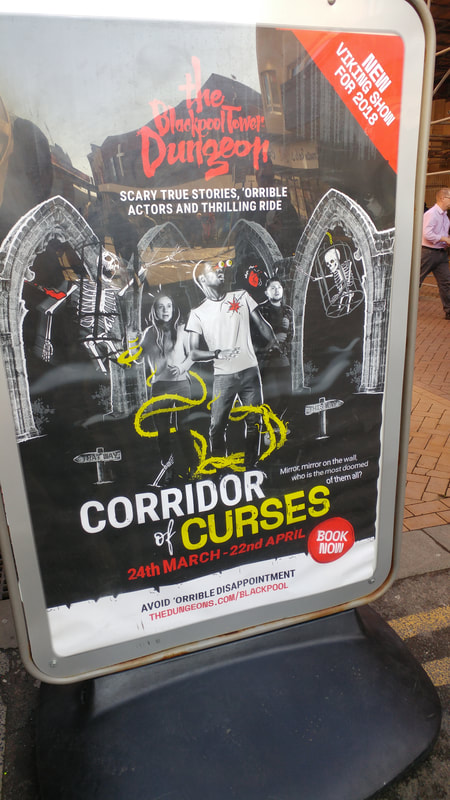 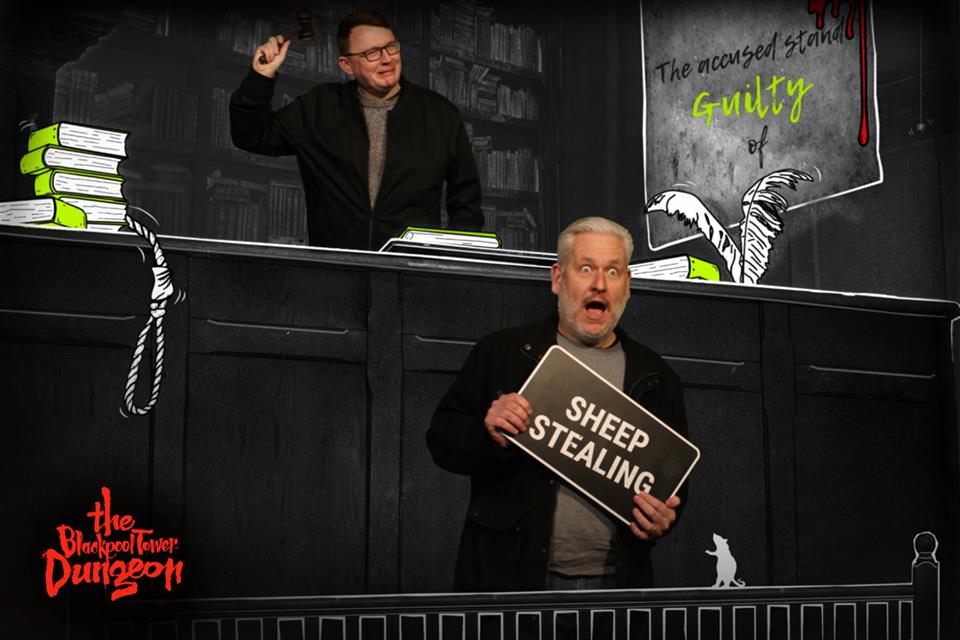 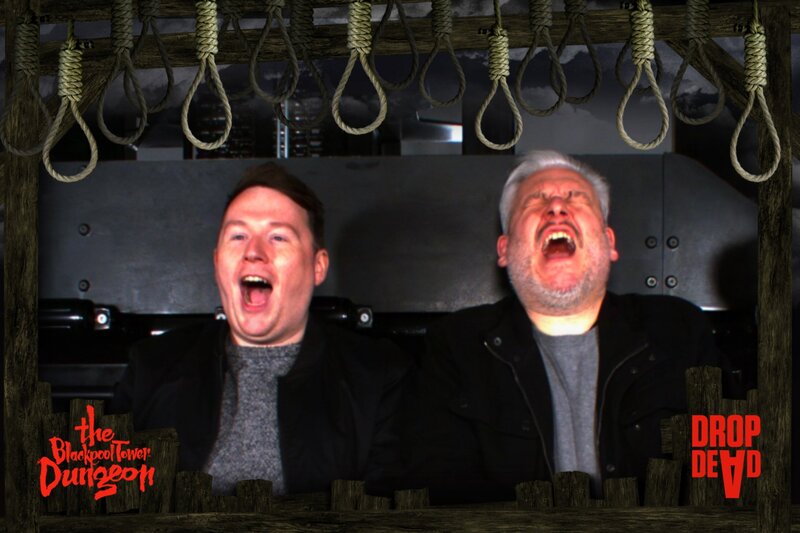 The restricted size and layout of Blackpool’s Tower Dungeon, unfortunately means that an extension of what is already on offer is fairly impossible, without the alteration or replacement of an existing show. However, 2015 has seen a number of changes, both temporary and permanent that we were excited to try out. Firstly, the exterior and queue line music has now been changed from creepy carnival to match London’s dramatic track. It was actually quite peculiar to hear this in a smaller dungeon, given that London is the biggest of the Dungeon chain. Nevertheless, this was only the first change we noticed and looked forward to venturing inside.

New for May half term was ‘The War of Roses’ – which was based on the bloody battles between the houses of Lancashire and Yorkshire. This new show has temporarily replaced the Vikings of the North show, and utilises actors and special effects quite well. One of the key criticisms of the Blackpool Tower Dungeon’s seasonal offerings in the past is that they usually seem to be primarily based in the Descent segment, with little or no follow up throughout the rest of the standard show. However, this time around, we felt that the new show was integrated well into the standard show. Descent began with the Black Jester introducing us to the War of the Roses, and his disdain for ‘Yorkshire Puddings’, before marking this unfortunate reviewer with the ‘White Rose of Yorkshire’, which was not to be removed. After this, the group were separated in to Lancashire and Yorkshire and ushered in to the lifts.

The show continued as normal, with a brilliant Plague Doctor’s assistant who informed me that not only did I have the mark of the plague, but also a mark of Yorkshire, which was much worse! When we arrived at the Torture chamber, where there was more emphasis on the conflict between Lancashire and Yorkshire than normal. The one marked with the white rose was locked in the cage as the torturer demonstrated their tools of the trade. Following being tried in court, we were condemned to the Labyrinth of the Lost. Whilst we don’t like to criticise as such, we felt that the mirror maze was nowhere near as effective as usual. Firstly, in place of the usual eerie and atmospheric track played throughout, was the same queue line music blasted across the maze. We felt that this was unnecessary and ruined any potential atmosphere. Secondly, one of the key scares within the maze was entirely out of sync, and ruined the surprise. Add to that the lack of fog, missing mirrors and very bright overhead lighting; we felt that the mirror maze was unfortunately not up to standard this time around.

However, following the maze was the War of the Roses show, which saw the usual Viking theming replaced by bloody shields and Rose emblems. One of the positives here was that the show used actors throughout, which was a refreshing change to the usual projection screen. the show had elements of both Guy Fawkes in London and Eric Bloodaxe in York. The actors were very enthusiastic, and whilst we will not spoil any of the surprises, one actor stood out due to the restricted, and possibly, uncomfortable position in which he was required to perform. The usual effects in the Viking show were altered to be in sync with the actors’ performances, which seemed to work quite well.

However, there was something about the show that made us feel like there should have been more. We could not fault the performances given, but we did feel that the show was building up to a climax that never arrived. We appreciate that there are limitations to what can be done, but we felt that the show ended fairly abruptly and there was a definite feeling of ‘Is that it?’ across the group. Additionally, we felt that the style of the show was immensely silly and over the top. Whilst silliness has always had a place within the Dungeon’s, we felt that the level employed here was, perhaps, a bit too far. Overall, ‘The War of the Roses’ at the Blackpool Tower Dungeon was a lot more satisfying than some of the other seasonal offerings in the past. There was a fair amount of gore, at least since the gore free rebrand, and the little touches leading up to the show itself were good. However, there was a lot of silliness and a feeling that the show just didn’t cut it (No pun intended), especially when compared to the other brilliant shows throughout.

Another one of the big changes for this year is the new ‘Hangman’s Tavern’ pub which is located at the end of the tour. The tavern takes up half of the original gift shop space, and is reasonably well themed. Speaking to one of the staff members, we discovered that the tavern has only been open for less than a week. After plummeting to our deaths on ‘Drop Dead’, it was fair to say that a stiff drink could well be deserved. We felt that the new tavern fits in beautifully and was a nice addition. Having said that, it is a shame that the original gift shop has lost some of its charm. Once a unique and detailed carnival/funfair themed, it is now quite small and generic. Whilst the show itself remains impactful, engaging and brilliantly played, we can’t help but feel that the Dungeons chain rebrand has seen some of the unique and impressive touches to the Blackpool Tower Dungeon disappear; the imposing Grim Reaper vanished with the new signage, and we have now seen the end of the once impressive gift shop. This is especially disappointing as the Dungeon isn’t even five years old yet!

Overall, the Blackpool Tower Dungeon remains one of the highlights of the UK Dungeons, and is definitely worth a visit. The consistently strong performances and little added extras with the seasonal show warrant a visit this half term. Just make sure you’re not from Yorkshire!