We recently visited Blackpool Tower Dungeon as part of our St Valentine's Day Massacre trip and received an extremely warm welcome from the whole management team on our arrival. The mood soon changed once we stepped inside and very soon we were nervously moving from scene to scene, not sure what would come next! 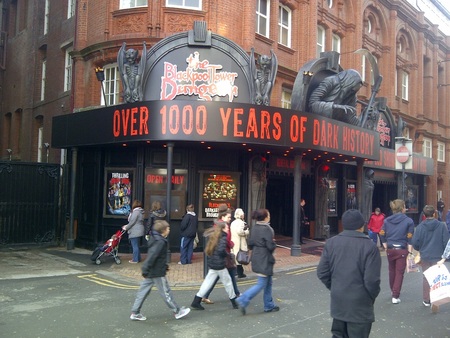 The main entrance is located on Bank Hay Street at the rear of the Tower but gives an imposing and foreboding presence to the thousands of Blackpool Tourists that pass by on this busy shopping street. It creates a great first impression and it was obvious that a lot of time and money had been spent in creating a façade which was both visually impressive and unique to any of the other dungeons, whilst still retaining its brand identity.

After the obligatory photo opportunity, we were ushered into a room with several others and a live actor who really worked the crowd well. He mixed in the usual rules with some great improvisational humour and scares with different members of the audience. We were fascinated with the immaculate theming and attention to detail in here, with cogs which turn as the actor summons the elevators to take you to your fate! The lifts themselves are fantastically themed and feature various effects which build apprehension perfectly, although we felt a few more effects could have helped overall. Saying that -  it was a nice touch and did actually give you the feeling that there was no going back.

If you have visited a similar Dungeons attraction in the country you'll instantly recognise some of your favourite scenes awaiting you. This could quite easily make an attraction seem stale but interestingly there's been some careful development to improve each one noticeably, giving it its own identity. In each room it is clear that Merlin have really gone to town on theming, creating one of their most immersive attractions to date.

In particular, the Labyrinth of the Lost is by far the best we've experienced, mixing an abundance of animatronics with detailed scenery and low lying mist. In some of the other labyrinths we've felt like it was fairly easy to find your way around, but here there was genuine confusion with a really well designed layout and a good number of startle scares and effects.
The stories and scenes all seem to flow together seamlessly and it's hard to pinpoint any one particular scene or effect. The Torture Chamber looked incredible with a really aggressive actor who was brilliant in his role and despite the standard script, his sheer energy and vitriolic approach took the experience to a whole new realm.  The Plague doctor was also re-invigorated with the incredible use of set design, lighting, impact scares and new effects, breathing new life into what is a tried and tested feature of the Dungeons brand. In a few of the scenes we had some sight problems with smaller guests unable to see the effects but this is more a case of us being a large group and some of the rooms being quite small.

Interestingly, between scenes there were a number of very dark corridors which often had something scary ready to jump out. We would say that the number of good impact scares as well as theatrical scenes would easily match Edinburgh for keeping guests on their toes!

Towards the end of the tour, we felt The Pendle Witches area was lacking in as much excitement. The rich theme and local nature of these characters deserve more than a large area with a video screen and batching area for people boarding Extremis. It's one of the very few niggles we had with the attraction, as it seemed like it could have been utilised in a much better way.

On our way out we visited the Dungeons gift shop which was stocked with  some really cool and interesting items for everyone. The gift shop itself is fantastcially themed like a fairground that's gone horribly wrong and feels like it belongs, rather than just being tacked on at the end as an afterthought.

Overall The Tower Dungeon is a welcome addition to Blackpool, a very special attraction where care and consideration have been used to create something unique. There were some genuine jumps and scares in places where new effects had been implemented with some pretty effective impact scares. We look forward to seeing how the attraction fares over the busy tourist season - we think it will be a screaming success!


After our visit the ScareTOUR group were invited for an exclusive chat and feedback session with Gary Blackadder, the manager of the Dungeon. During this time he addressed some of our concerns (especially regarding the Pendle Witches section) and highlighted that long term plans are already being discussed as to how to make certain sections better. The Dungeon attractions are always being refreshed with new shows and attractions and it would seem that Blackpool is no different. We look forward to coming back to experience some of these changes when they are implemented.

We greeted the organiser of the trip Michael outside the intimidating front entrance - he had bagged us some free passes - good work fella! Starting off in a very dark room you instantly feel an atmosphere of foreboding like you've been sent back in time to the victorian era. A jester with a bloodied face appears as if from nowhere. There's somethin genuinely unerving about him. We are led down in a lift and he gives us plenty of nervous laughs as he naughtily exclaims how he enjoys the crush of bodies in the lift. After an intro from a monk reading from a book in a claustrophobicly small room we head on. The highlights are a madman in an old fashioned style operating theatre which includes some great special effects - the madman holding up a still beating heart was clever. I won't give anythin else away ! My girlfriend was plucked from the audience and what happened next I couldnt possibly say. Lets just say I was worried! Another highlight was being led into a dingy seated room and being faced by a gammy teethed maiden. She instantly picked on me and demanded I stand. I did so and she spat at me with real poison 'I dont trust you!' I said back to her , 'well I dont trust you either!' She got irate and threatened me 'dont you DARE back chat me!! What is your name?' So I told her - Kasper. She then refered to me as cocky kasper for the next ten minutes! What followed then were some really effective scares that I wont give away! On the way out as I walked past the grim faced maiden I said to her, 'alright gorgeous!' she replied, 'In your dreams!' I said back 'In my nightmares more like!' Thinkin I'd had the last word I moved on. But she shouted behind me,'dont pretend you wouldnt enjoy it!'. This made me laugh and the reason I mention it is to demonstrate the brilliant way you can banter with the characters in this dungeon. This also ensure no two visits will ever be the same so gives a good reason to re-visit. I should add that my girlfriend wasnt impressed with the gammy faced maiden's advances but it gave her a laugh! Another highlight was the torturer who was great with the kids and made us chuckle. By the way some people brought in very young kids which I thought was cruel and you could at certain points in the dungeon that they were crying with fear. I would reccomend no kids younger than 7. The last feature, the drop, was great and produced some hilarious pictures. Overall, the atmosphere was great with scary sounds effects and nasty smells - I had to convince my girlfriend I hadn't farted! My criticisms would be that the viking scene should have had real actors fighting instead of on the screen, the drop should go more than once as we all wanted 2 go again. Some suggestions: a skeleton jumping out at you when the lift doors open and some scary faces appearing behind the mirrors in the hall of mirrors. Louise my girlfriend also suggests there's more in there that showed how the kids in those days had to suffer with poverty, little clothing and disease. This would show the the spoilt brats of today how lucky they are and appreciate what they've got. Thanks to dungeon manager Gary Blackadder who was very welcoming and interested in all our opnions. All the best for the future blackpool dungeons c u again soon! Kasper Lewis

Tickets are quite pricey on the door. Yet using a merlin discount voucher or buying your tickets online saves a lot! I highly recommend it! The attraction lasts a long time, I'm usually used to attractions that last 10-15 minutes each, however the tower dungeons can last up to an hour, it is well worth it but it does take a long time to get through it all, which I was very excited about!

The special effects are incredible! This was my first time on a Dungeons attraction, so I had no idea what to expect! I'm not going to give any of the scares away, but some of the special effects will make you scream, feel disgusted, not be able to understand what is real and not, they will make you feel uncomfortable, uneasy and maybe even sick, but it's all for a good cause!

The use of audience participation is also very fun, if you are are of the lucky (or unlucky!) ones to get picked out to do something for the actors, it's going to be a great laugh and a great memory for you and who ever is with you.

As well as being a scare attraction, it is also historically educational, you will be taken through time periods, and be told in creative, gruesome and evil ways of the dark history of the Pool that is Black! This is great for the audience as it teaches messages and history and at the same time giving you nightmares.

Extremis: Drop Ride to Hell! will also give you the most hilarious ride photo you have ever seen in your entire life.

If I was to criticize and change anything in the Blackpool Tower Dungeons, I would have the Vikings section last longer, with a bit more live action, as nothing much happens in this room. I would also make the Pendle Witches section longer, with a few more scares, and a bit more history on the subject. And also in the Extremis room, instead of having a projector screen 'judge and hang you' I would replace this with an animatronic.. or actors.

Also a 'Traitor Boat Ride' would be nice but maybe I'm being a bit too picky.

Certainly not value for money. I was overcharged and far from trying to sort the matter out the manager and his complaints manager both lied to me when I queried the charge.For your information since I spoke to you I have discovered that you DO have a price for children under 16. It is on the back of one of your special promotions.

Also I do not appreciate being treated like Baldrick! Those lessons you said you would learn... try honesty, fair pricing policy and treating your customers with some respect.